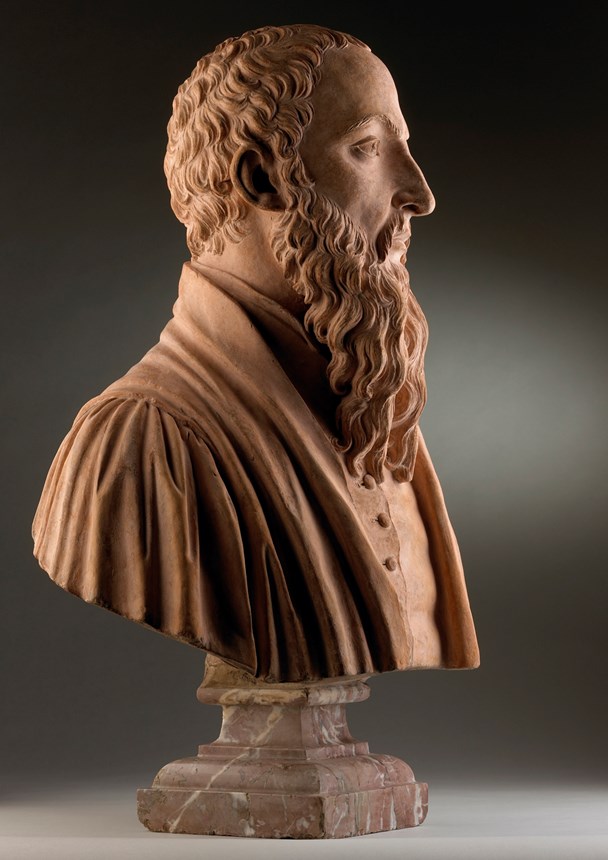 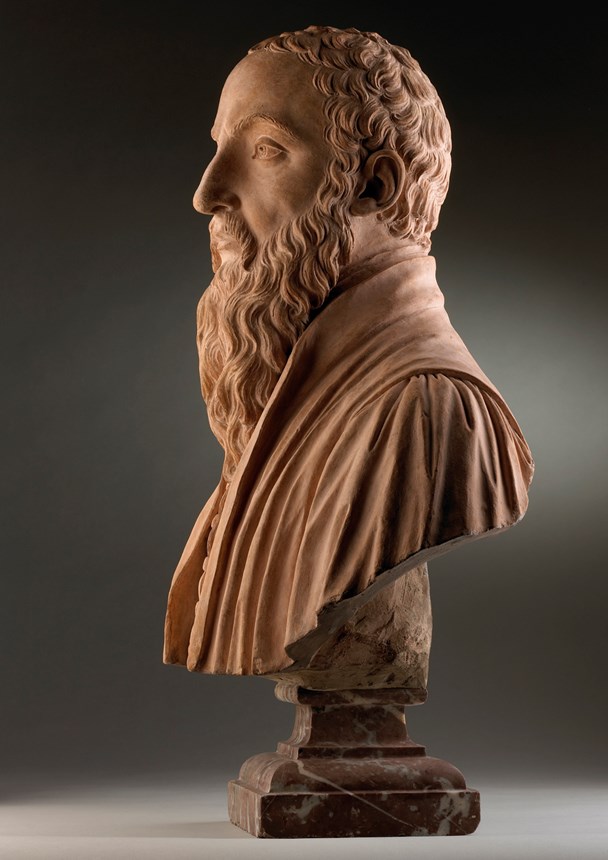 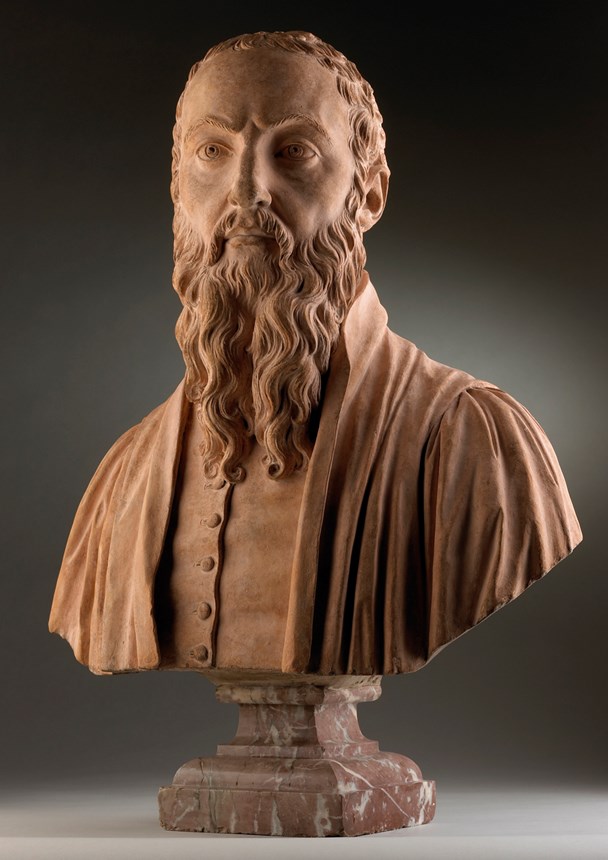 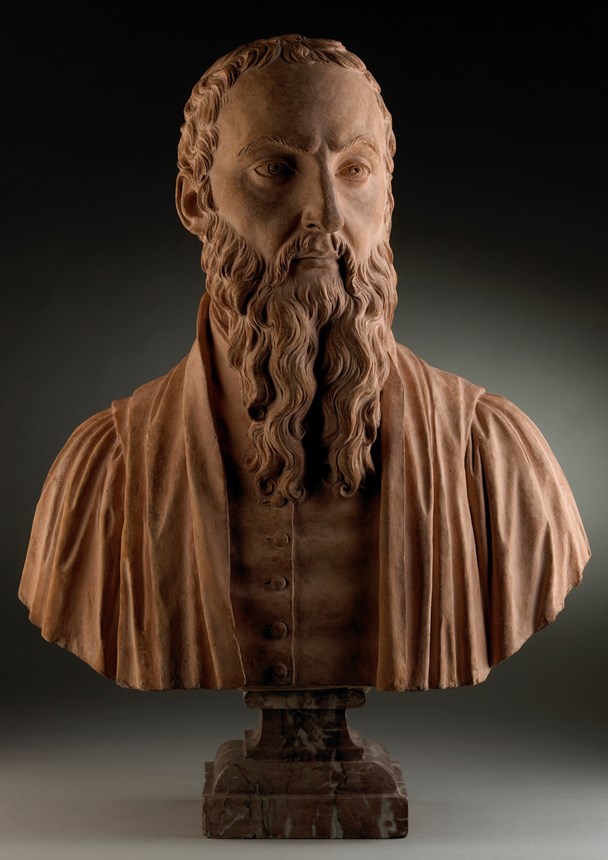 Gilles-Lambert Godecharle (1750-1835) was one of the most renowned Flemish sculptors of the late eighteenth and early nineteenth centuries. Until 1770 or 1771 he was apprenticed to Laurent Delvaux. His master’s influence with Charles of Lorraine, the Austrian Governor of the Netherlands, in 1769 secured for him an allowance to cover the whole period of training. In 1772 he left his native country for Paris and was soon afterwards accepted (agréé) by the prestigious Académie Royale de Peinture et de Sculpture. In Paris, Godecharle met the best French sculptors of the time, such as Jean-Antoine Houdon, and he enjoyed the protection of Jean-Baptiste Pigalle and of Jean-Pierre-Antoine Tassaert, who took him on as an apprentice. In 1775, when Tassaert was appointed court sculptor to Frederick the Great of Prussia, Godecharle accompanied his master to Berlin, where until 1777 he worked with him on official commissions, mainly portraits of Prussian generals. In 1778 Godecharle travelled to Rome, where he was awarded first prize for sculpture by the Accademia di San Luca in the very same year.  In 1779 he completed a project for a grandiose monument dedicated to the Empress Maria Theresa by her son, the future Emperor Joseph II, and by her brother-in-law, Charles of Lorraine. This was to be an obelisk placed in an octagonal basin, to be erected in the Parc Royal at Brussels; Houdon was to collaborate on the project. It was not executed, however, because in 1780 both the Empress and Charles of Lorraine died. Although this first commission did not come to fruition it showed how highly Godecharle was regarded in official circles in his native land, where he returned before the end of 1779. As further proof of this esteem, he was commissioned in 1781 to sculpt the pediment of the façade of the palace of the Sovereign Council of Brabant at Brussels (now the Palais de la Nation). The two remarkable terracotta models for this (Brussels, Musée d’Art Ancien) display Godecharle’s talent and virtuosity better than the pediment itself, which has suffered from erosion and the effects of a fire. For the summer residence of the Austrian governors at Laeken near Brussels (now the Royal Palace), Godecharle designed sculptures to adorn the pediment and the portico. He also received commissions from Church authorities. He produced two monumental allegorical statues in stone for the church of Saint Jacques-sur- Coudenberg, Brussels—the Old Testament and the New Testament (both 1787; in situ)—as well as three bas-reliefs, The Nativity, The Last Supper and The Entombment. With time his style grew slightly more severe, leaning towards a stricter Neoclassicism.

Godecharle enjoyed extraordinary renown during his lifetime. In 1814 he was appointed Professor at the Académie des Beaux-Arts in Brussels. He received numerous distinctions and was ofﬁcial sculptor for several successive governments. Godecharle was inﬂuenced by the French tradition of the eighteenth century, but his style remained allied to Flemish art. His terracotta models and his portraits demonstrate that he was one of the best of his country’s sculptors in his time.

Our bust depicts the French Renaissance philosopher and essayist Michel de Montaigne, at a mature age, with a studious gaze and a characteristically long beard. This well-preserved terracotta was made by Godecharle as a model for his bust of Michel de Montaigne for the garden of the Château de Wespelaer, near Leuven/Louvain, Belgium, now housed at the Musée d’Art Ancien, Brussels (inv. 3496).

In the last decade of the eighteenth century, the estate of Wespelaer was acquired by the famous brewer Léonard Artois, from nearby the city of Leuven. One of his daughters, Jeanne-Marie Artois, married Jean-Baptiste Plasschaert, who subsequently became Châtelain de Wespelaer. Plasschaert wanted to transform the rather modest château into a more luxurious one. He therefore hired Ghislain-Joseph Henry, the leading architect of his time, who would later be commissioned by Napoleon to restore the Castle of Laeken. For the sculpture in the park, Plasschaert commissioned the celebrated sculptor Godecharle.

Plasschaert would not live to see the end of the Wespelaer project, but before his death the garden had been redesigned by Henry and fully decorated by Godecharle. It was meant to be a park à l’anglaise, complete with a pond, a river and a waterfall. It comprised a number of statues, sculptural groups, marble vases and busts, and some constructions such as a Roman temple, a pyramid and a Chinese pavilion. At the beginning of the nineteenth century it was generally recognized as one of the most beautiful estates in the country.

Godecharle created most of the sculptures that were to embellish the garden.  He worked on the commission between 1791 and 1822. There were nine statues and seven groups, of which twelve depicted ﬁgures and subjects from classical mythology. Some of these were copies, like that of the Flora Farnese, the Apollo Belvedere and the Borghese Hermaphrodite.

In addition to the aforementioned sculptures, Godecharle also worked on the busts that were to be located on an artiﬁcial island in the castle lake, known as the Champs-Elysées. Inspired by Masonic symbolism, the small island was circular in form, with a diameter of around 150 m, lined with trees and centred around an obelisk. In total Godecharle created 37 busts of famous men from history, with a predilection for writers, thinkers and emancipators. Amongst those represented were Voltaire, Frederick of Prussia, Socrates, Henri IV, Pythagoras, Rousseau, Plato, George Washington, the Count of Egmont and also Michel de Montaigne. The busts were sculpted in 1816 and 1817, out of a white stone from Avesne known as pierre de France. When they were ﬁnished, the busts were painted white to make them look more like marble and placed on bases of blue stone (pierre de Hainaut), which were also painted white. Most of the statues carried an inscription, usually a well-known citation from the works of, or a quotation associated with, the person depicted. Amongst these stood the stone bust of Montaigne, with the inscription below, quoting his famous sceptical remark: “Que sais-je?” (What do I know?). Godecharle ﬁnished that bust in 1817.

The statues from the Wespelaer garden are often considered to reﬂect the talent of Godecharle to perfection. By the time Godecharle obtained the commission from Plasschaert, he was already a renowned sculptor and he had already created the works for which he is best remembered today, namely the pediments of the Palais de la Nation or Belgian Parliament (1781) and of the Royal Palace at Laeken (1783), as well as the other decorative sculptures of the palace. Following his rise to fame and the increasing number of commissions that came with it, Godecharle increasingly relied on a number of assistants for the ﬁnal execution of his work. This was particularly the case for most of the works that were displayed in the garden at Wespelaer, given the great number of statues that had to be completed in a short period of time. Godecharle probably mainly made the terracotta models for these sculptures, leaving the ﬁnal execution of most of these statues to a large extent to his assistants.

After Plasschaert’s death, the estate was inherited by his widow. She carefully saw to it that her late husband’s project reached its completion. After her death in 1840, the estate was ﬁrst inherited by the Mamef family and not long afterwards came into the possession of the Willems family, also through inheritance. In 1898, the widow of Edmond Willems sold the majority of the sculptures from the garden. The lion’s share of the sculptures (including the bust of Montaigne) were acquired by the Belgian State and entered the collection of the Musées Royaux des Beaux-Arts as possibly the most important suite of Belgian sculptures ever made.