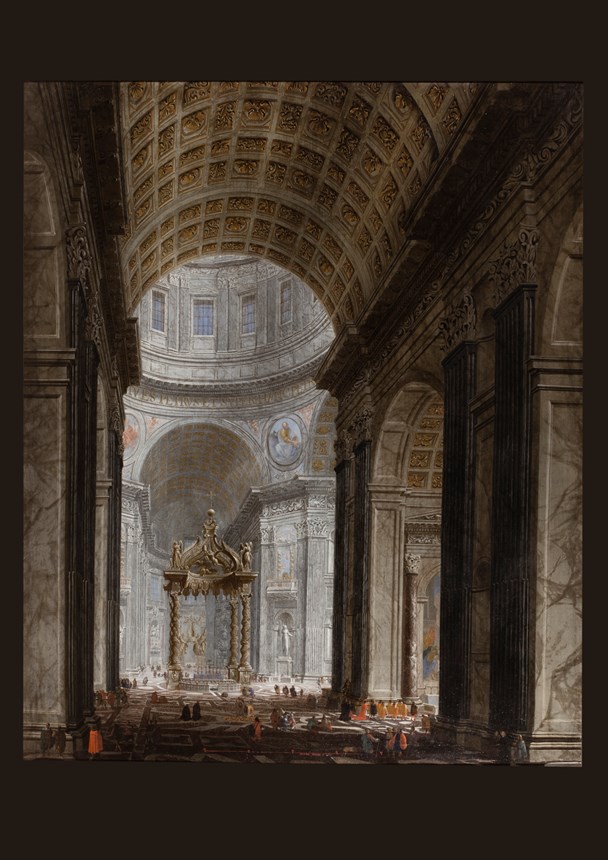 In 1662 Wilhelm Schubert van Ehrenberg entered the painters guild of St Luke in Antwerp, the city where he resided for most of his career. He specialised in grand interior views – often collaborating with fellow painters, who would execute the figures populating his monumental architectures – and ‘gallery paintings’, detailed representations of picture galleries. His subjects varied from churches to palaces, and from the real to the fantastical. His brushstroke, always fine and luminous, expertly outlined these interiors with great accuracy, as the artist clearly delighted in the intricacy of baroque rooms and princely corridors.

The present canvas, signed and dated 1665, perfectly embodies van Ehrenberg’s painterly vocabulary and exemplifies his tremendous skill as an artist. The central nave of St Peter’s Basilica, looking towards Gian Lorenzo Bernini’s famous Baldacchino, is rendered in its every detail, yet its sheer scale is heightened by the painter’s choice of viewpoint and by his dramatic depiction of light, with the foreground darker and the background diaphanously illuminated. The almost minuscule figures also highlight the church’s grand size, yet also make it accessible to the viewer in a way that a cold, empty interior could never be. The name of Charles Emmanuel Biset (1633-1710), who often collaborated with van Ehrenberg, has been suggested for these.

The significance of this painting also rests on the specific moment in the history of St Peter’s Basilica it depicts, and on upon its provenance. Featuring a scale, painted in red, on its very foreground, this interior view almost appears to have been conceived as a specific record. Indeed, in 1665 Bernini’s Baldacchino had only been finished three decades and was rightly considered one of the wonders of modern Rome. Commissioned by Pope Urban VIII, it stands 29 metres high, towering over the papal altar, an exuberant masterpiece of the Baroque. Behind its four colossal twisted columns, elaborately gilt and adorned, we can see the Throne of Saint Peter’s in Glory or Cattedra: a complex construction designed by Bernini to encase the relic of the seat of the Apostle Peter. The monument was completed in 1666, circled by a gilded triumph of sunrays and sculpted clouds and putti, of which we only see the initial steps here. Describing the long and complex construction of the Cattedra Roberto Battaglia (R. Battaglia, La Cattedra Berniniana di San Pietro, Rome, 1943) confirms that the four doctors of the church figures and throne were placed on the apse at the beginning of 1665, whilst the Gloria was still to be completed. According to Battaglia, scaffolding was still present around the monument on the 29th of November and was taken down soon afterwards: this would suggest that the present picture was created in December 1665.

After work was completed on the Gloria and window, the Cattedra was inaugurated on the 17th January 1666. The gilded stucco decoration on the ceiling of the apse above the Cattedra is yet to be applied, and what is visible here is only the design. To the sides of the Cattedra are the Monument to Pope Paul III, sculpted by Guglielmo della Porta under Michelangelo’s direction, and the Monument to Urban VIII by Bernini. The four piers looking towards the papal altar were decorated to compliment the Baldacchino. Four niches were opened, each with the colossal statue of the saint whose relic it contained (the relics were housed in the loggias directly above the statues). In the north-west pier we see Andrea Bolgi’s statue of Saint Helena carrying the Cross, completed in 1640. Over the loggias, the pendentives of the dome are decorated with circular mosaics of the four Evangelists. Saint John the Evangelist, with the Eagle, was executed by Giovanni de’ Vecchi, while Saint Mark, only partly visible in the present painting, by both Cesare Nebbia and Paolo Rossetti. In the 18th century various altarpieces were removed from the basilica, and replaced with copies in mosaic of more famous paintings. This was the case with the altarpiece on the altar of Saint Jerome, which can be glimpsed on the right. Originally, the altar contained a painting of Saint Jerome by Girolamo Muziano (now in S. Maria degli Angeli, Rome), which was replaced in the 1730s by Pietro Paolo Cristofari’s mosaic after Domenichino’s Last Communion of Saint Jerome (now in the Pinacoteca Vaticana).

The unique character of this painting becomes all the more evident once we consider its provenance, recorded as early as the second half of the eighteenth century as pope Pius VII. The pontiff then gifted it to the Belgian Colonel Bernard Eugène Rottiers, whose collection of antiquities is now part of the Rijksmuseum van Oudheden, from whom it then entered the collection of Lord Charles Townshend, which included paintings by other Flemish masters such as Rubens and Van Dyck.