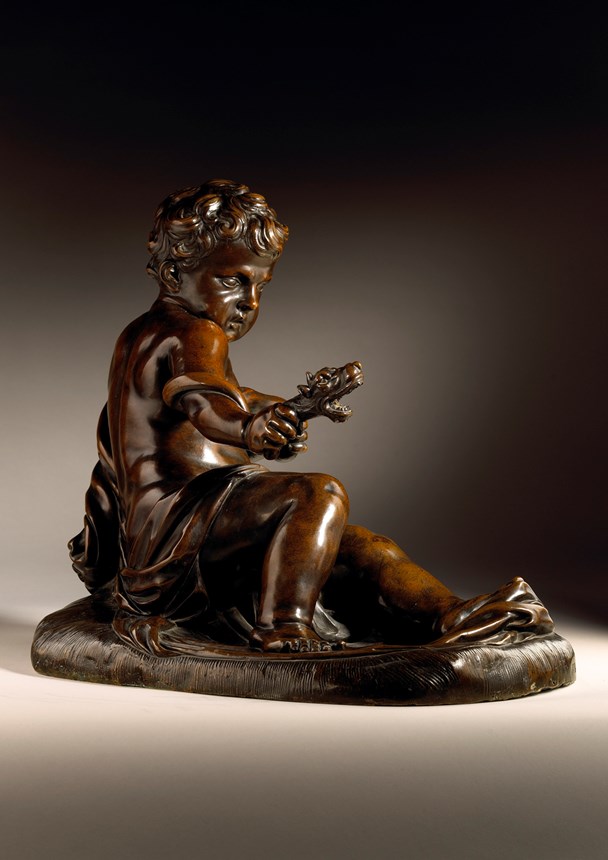 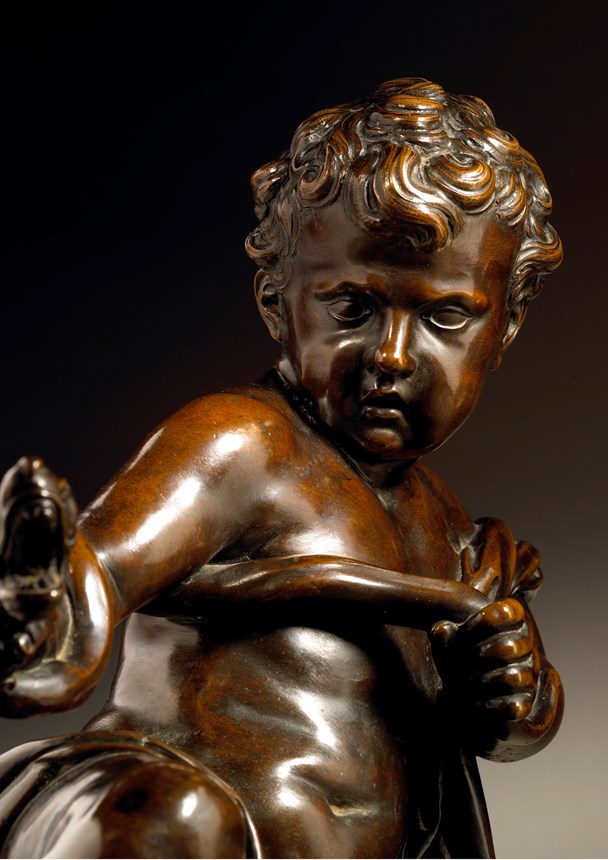 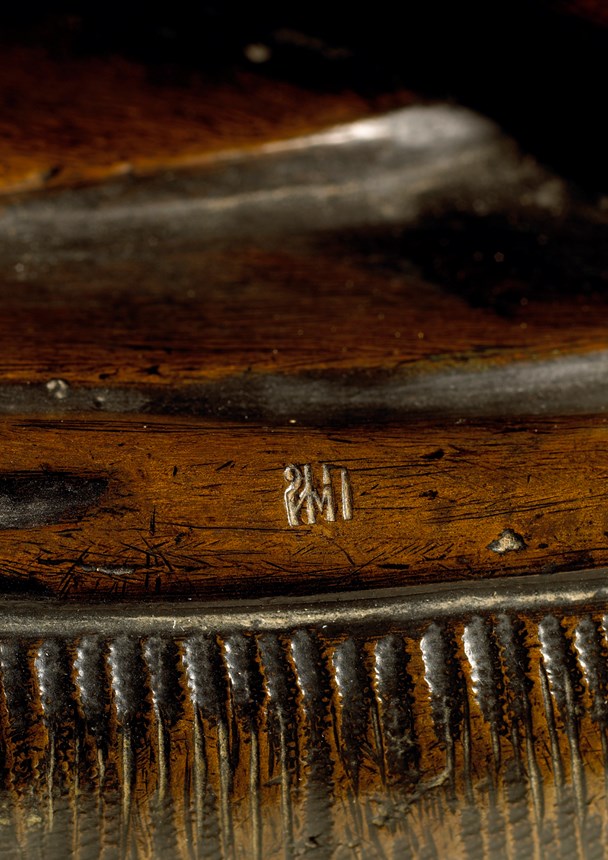 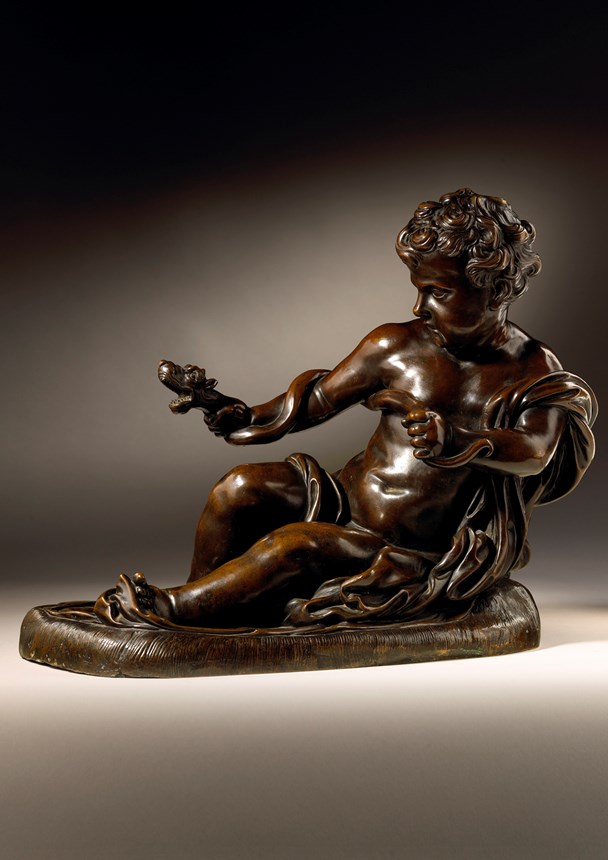 The Infant Hercules Wrestling a Snake, Based on a model by Alessandro Algardi (1598 - 1654)

Thanks to research and investigations by Dr. Sergej Androsov, Head of Western European Art at the State Hermitage Museum, St. Petersburg, the distinctive monogram which appears twice on the present bronze, can be identified as the stamp belonging to the collection of Count Aleksej Semenovich Musin–Pushkin (1730-1817). For in the Hermitage, there is a French bronze dated to circa 1770 – 1780, of ‘An infant with Grapes and a small Satyr’ with the same pair of stamps, that entered the collection of the Hermitage in 1920 from the Musin – Pushkin family (fig.1).

It is most likely that the bronze in the Hermitage belonged to Count Aleksej Semenovich Musin–Pushkin (1730-1817), Ambassador to the United Kingdom from 1765 to 1768 and then Sweden between 1779 and 1783. As a diplomat he is noted for promoting the participation of Russian merchants in the external trade relations and devised to found in St. Petersburg a Russian equivalent of Britain’s East India Company. However, he is perhaps primarily known for his important role in organising Catherine the Great’s infamous purchase of the esteemed art collection of Houghton Hall in 1779, which belonged to Britain’s first Prime Minister Sir Robert Walpole (1676 – 1745). Here 200 major paintings were sold for a sum around £40,000 and consisted of largely Dutch and Flemish masterpieces by Jacob Jordaens, Rembrandt, Rubens and Van Dyck. The British outrage at the sale was so great that it inhibited the Hermitage from lending any Walpole paintings for exhibition in England until the 20th century, for fear that the works would be seized and not returned.  Importantly, he was also President of the Russian Academy of Art in the early 19th century and some of the sculptures from his collection entered the Hermitage in the 1920s, after a sale before 1917. Other works hailing from the Count’s collection include Sir Anthony van Dyck’s 1632 portrait of  Philip, Lord Wharton, now in the Andrew W. Mellon collection.

The inspiration for the present bronze was surely the composition cast around 1650 by the Roman Baroque sculptor Alessandro Algardi (1598-1654), whose authorship was first recognised by Jennifer Montagu in her major study on the artist (see J. Montagu 1985, II, pp. 405-08). A rare model, it exists in a fine bronze version at Burghley House, England (fig. 2), where it was already recorded in 1763 as by Algardi. The present Hercules varies only slightly from the Burghley version, in the configuration of the drapery in which the infant is entwined and the unusual physiognomy of the snake’s head. Indeed, in our bronze the snake has a somewhat canine character, which appears to be an idiosyncratic interpretation deriving from the sculptor of this piece’s own design.

The subject of our bronze is taken from ancient mythology. The goddess Juno, wife of Jupiter, had sent serpents to kill the infant Hercules because he had been born from the union of her husband with Alcmena, the wife of Theban general Amphitryon. However, when the beasts entered his cradle, Hercules strangled them with his bare hands. Ironically, though probably not for the goddess, the hero’s name means “glorious gift to Hera” (Juno). In Algardi’s sculptural re-telling of the story the hair and fabric are modelled in such a way as to imbue the composition with considerable movement and dynamism, masterfully conveying the sense of Hercules’ struggle with the serpent. The drama of the scene is therefore intensified, as one feels that the child’s life could be in imminent danger. These affective qualities and characteristics are redolent of the High Baroque style, of which Algardi was one of the leading proponents.

However, what marks out the sculpture of Algardi among his contemporaries is that passages of his work display a restrained, classical realism, seemingly inspired by the Antique. A possible reason for this is that, soon after his arrival in Rome around 1625, the artist was commissioned to restore ancient statues and is thought to have engaged in this activity until about 1635. His intimate knowledge of classical statuary during this period clearly influenced his work for the rest of his career. For example, one sees in the present model an obvious echo of the antique work of the same subject in the Musei Capitolini, Rome (fig.3), formerly in the Albani Collection. Algardi perhaps drew on the way the infant is seated, with one leg bent, and on his thickly curled hairstyle. Although the somewhat benign and serene character of the ancient example appears to have been abandoned by Algardi in an attempt to increase the sense of danger in the encounter, it has been largely re-discovered in the present late seventeenth- or eighteenth-century version, for the child’s body is not so contorted and the hair and fabric are less tumultuous than in its mid-seventeenth century forbear.

The present bronze was in the collection of the French Industrialist Eugène Secrétan before the end of the nineteenth century. Secrétan was the incredibly successful French industrialist who famously donated 60,000 kg of copper for the construction of New York’s Statue of Liberty. His remarkable collection of Old and modern masters was sold by Galerie Sedelmeyer in 1889, the year of Paris’s Exposition Universelle, being showcased in the Tour Eiffel. The sale attracted buyers from all over the world and was the arena of a memorable bidding war between the Musée du Louvre and the American Art Association over Jean-François Millet’s seminal painting L’Angelus (1859), now in the Musée d’Orsay in Paris.

The Infant Hercules Wrestling a Snake, Based on a model by Alessandro Algardi (1598 - 1654)