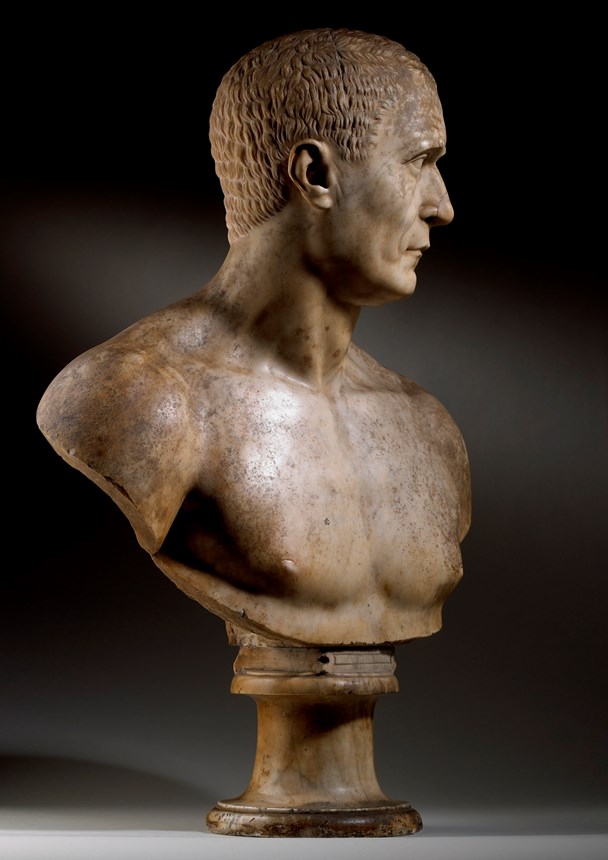 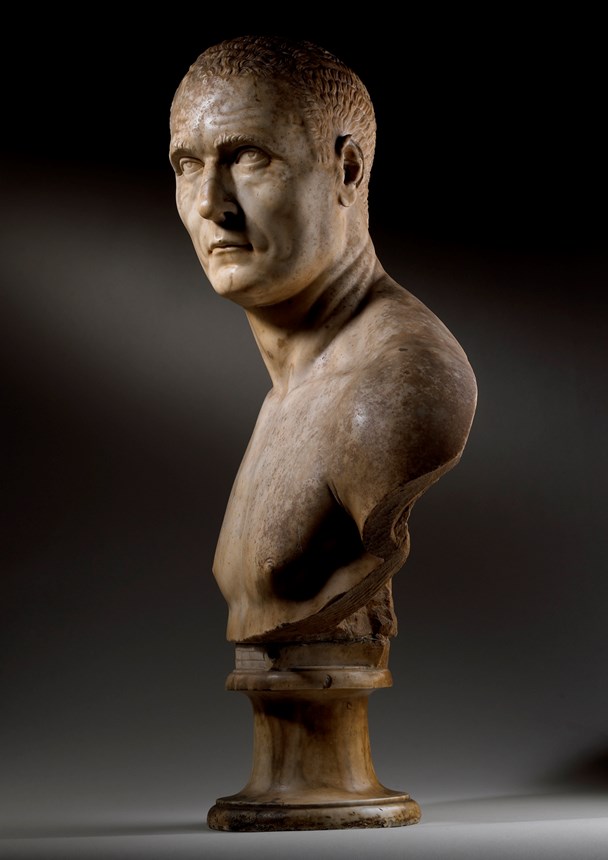 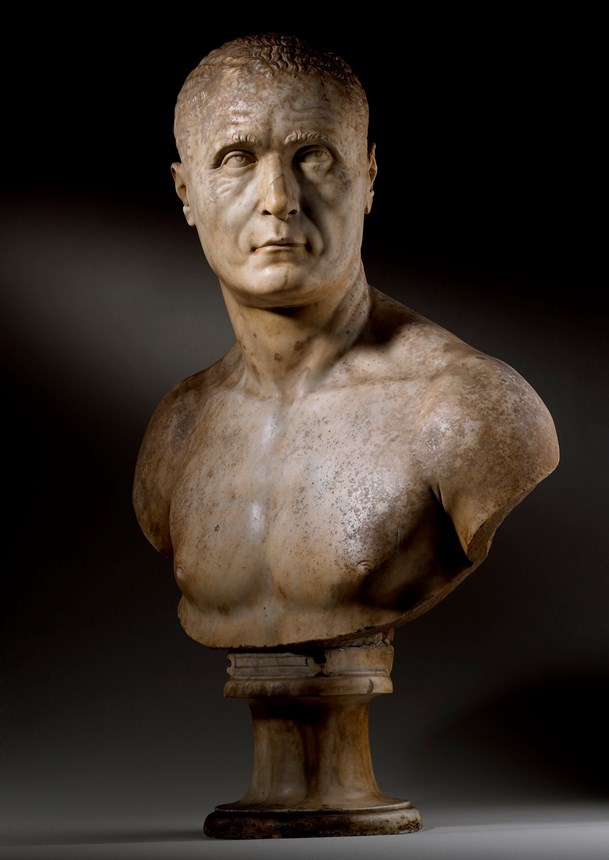 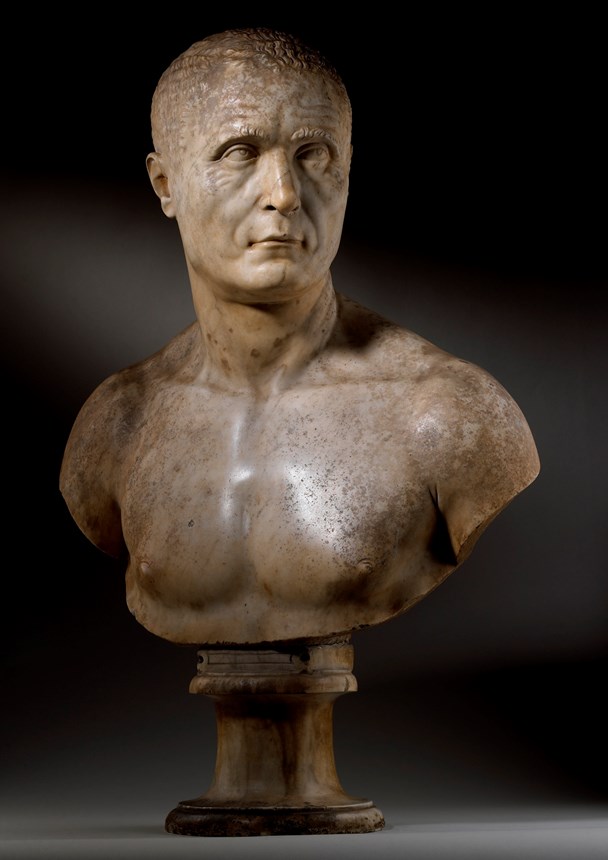 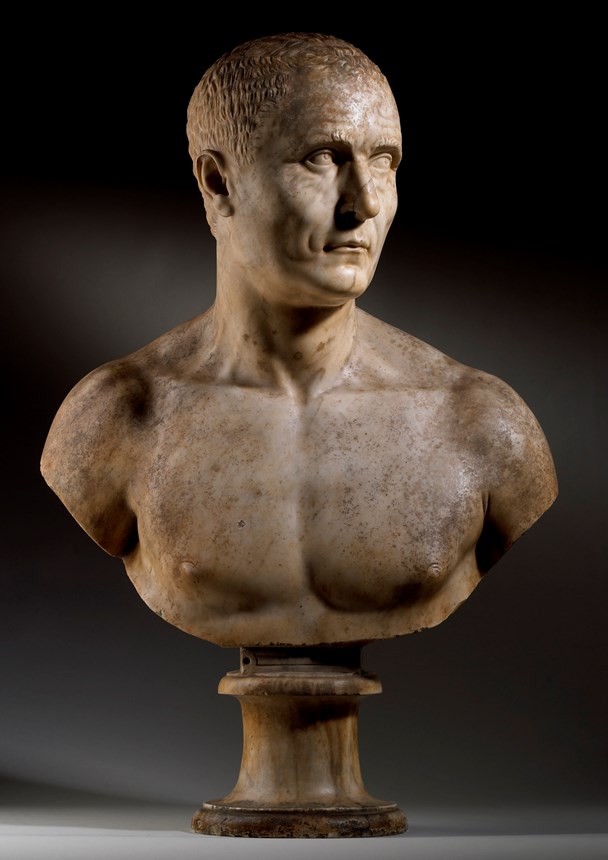 Bust of an Unknown Man, after the Antique

First half of the 18th century

This powerful portrait of a man in the prime of his life – his short curly hair framing a gently furrowed forehead, his eyes casting a commanding gaze to one side, from under a pair of attentively drawn bushy eyebrows – is a unique eighteenth-century version of a remarkable Hadrianic portrait (c. 130-150 A.D., fig. 1), acquired in Rome by the architect Matthew Brettingham the Younger (1725-1803) for his patron Thomas Coke, 1st Earl of Leicester (1697-1759).

The Earl had visited Rome during his Grand Tour, between 1712 and 1718, and started collecting many valuable and unique manuscripts and printed books, along with great works of art and statuary. Years later, to complete the decoration of the country seat Leicester was building – Holkham Hall in Norfolk – it was deemed necessary to send Brettingham to Rome to purchase further works of art, a task he undertook between 1747 and 1754. In the account book of his Italian sojourn, Brettingham lists a “Bust of ye Sylla Antique in Marble” (the prototype of the present bust), as part of a shipment dispatched to his patron in June 1754. No indication is given of where the marble had been excavated, but 1754 constitutes an important terminus ante quem for the execution of the present bust, as it can only have been carved in Rome, through direct observation of the Hadrianic portrait, the dimensions of which it closely matches.

The identification of the likeness with the statesman Lucius Cornelius Sulla (138-78 BC), mentioned in Brettingham’s account book and derived from an inscription on the back of the Holkham bust, has been shown to be unfounded through comparison with other ancient effigies. Yet the imperious countenance of the sitter certainly suggests he was a man of rank and likely held public office. Distinctive elements in the original, such as the carved pupils and overall realism in the modelling of the facial features and locks of hair, indicate that it is a portrait from the Hadrianic period, in the first half of the second century A.D. These qualities are skilfully rendered in the present bust, which displays the same firmness of the gaze and finesse of execution.

At the end of the eighteenth century, the present bust was acquired by Cardinal Antonio Despuig y Damento (1740-1813), the scion of a noble family from the Spanish island of Mallorca, the Counts of Montenegro y Montoro, and a respected figure within the papal curia. Through his nomination as a member of the Sancta Rota tribunal, the Cardinal had moved from Spain to Rome in 1785, where he predominantly resided until 1791. Despuig y Damento possessed a large library and collection of master paintings, which, once in Rome, he set out to expand with a selection of ancient statuary and epigraphy, as befitted a man of his stature and learning. Upon his departure from Rome, he determined to have his collection on display in Mallorca, divided between his ancestral palace and country villa. Our bust was housed in the latter, the Alquerìa de Raxa (fig. 2), where it was recorded, in the peristyle, by the local historian and writer Joaquin Maria Bover de Roselló. In his published account of the Cardinal’s collection, printed in Mallorca in 1845, the present bust is described as having been excavated in Ariccia in 1789.

During his time in Rome, the Cardinal had indeed purchased land near Ariccia, an important archaeological site on the Albani Hills south of the papal city, where he undertook excavations between 1787 and 1796. These are carefully recounted by the local canon and historian Emanuele Lucidi (Memorie storiche dell'antichissimo municipio ora terra dell'Ariccia, Rome, 1796), who followed much of the progress of the Cardinal’s campaign in person. Despuig’s efforts proved fruitful, and by the time it was shipped to Mallorca, his collection counted many important ancient statues and inscriptions. Yet, scholars today are certain that the Cardinal also acquired statuary from the many agents and artists active in Rome at the end of the eighteenth century, as appears to have been the case with the present bust. Archival evidence on this matter is yet to come to light, but we know that Despuig must have been acquainted with the famous Scottish antiquarian Gavin Hamilton, from whom he had purchased the land in Ariccia. Given the present bust’s high quality and connection with the British circle of Grand Tourists, it is possible that it came to the Cardinal via Hamilton.

Shortly before 1862, the noted German archaeologist Emil Hübner visited Mallorca and observed the collection of statuary at the Alquerìa de Raxa, which he included in his 1862 survey of the antiquities in Spain and Portugal. Some years later another eminent German scholar, Wolfgang Helbig, attempted to see the collection in Mallorca, but was told that it would not be possible, on account of the owner’s absence. A third German archaeologist – Paul Arndt, who was acting as an advisor to the Danish collector of antiquities Carl Jacobsen – travelled to Mallorca in 1897, yet the owner of Raxa at the time – Ramon Despuig Fortuny (1827-1925), 8th Count Montenegro y Montoro – mistook Arndt for a creditor and refused him access to his property.

As the curator from the Ny Carlsberg Glyptotheque Mette Moltesen writes, “this misunderstanding was cleared and Arndt could return to Jacobsen with a list of the sculptures which were for sale. Apart from ancient marble and bronze sculptures the collection contained paintings, tapestries, and a large library. Count Montenegro naturally preferred to sell his collection en bloc and had given over the sales negotiations to a young sculptor, Lorenzo Rosselló y Rosselló (1867-1901) who lived in Paris.” Nevertheless, Jacobsen was able to purchase twelve sculptures from the Despuig collection, two years before it was sold at auction in Paris in 1900. The present bust appears under lot number 63 in the catalogue.

Bust of an Unknown Man, after the Antique