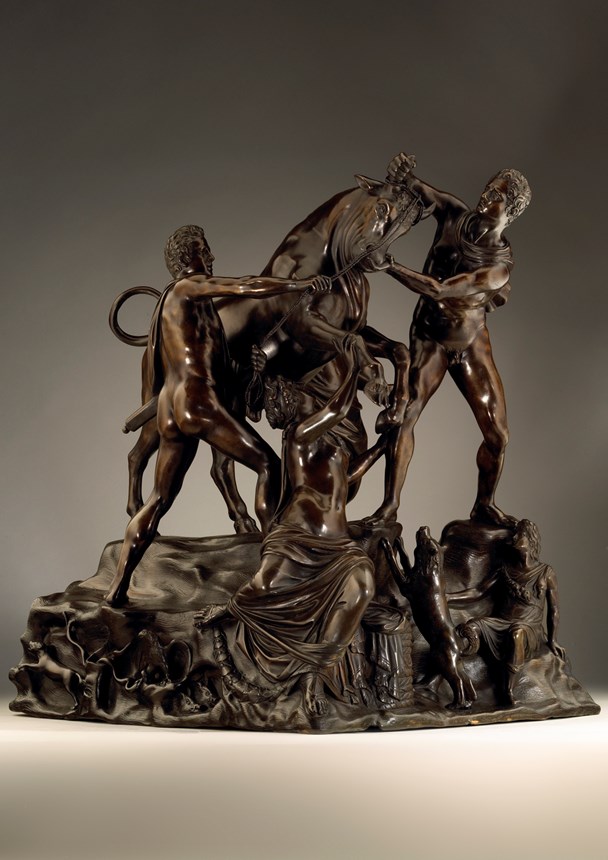 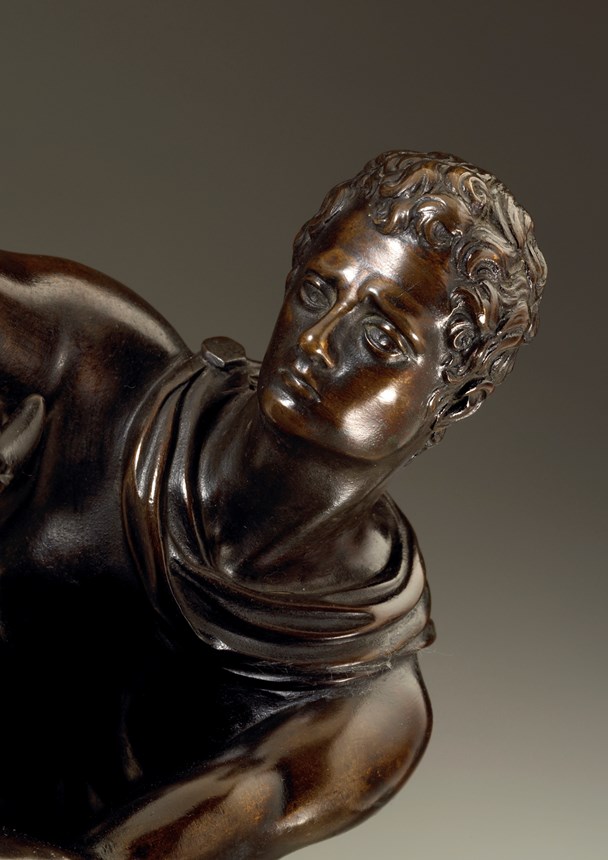 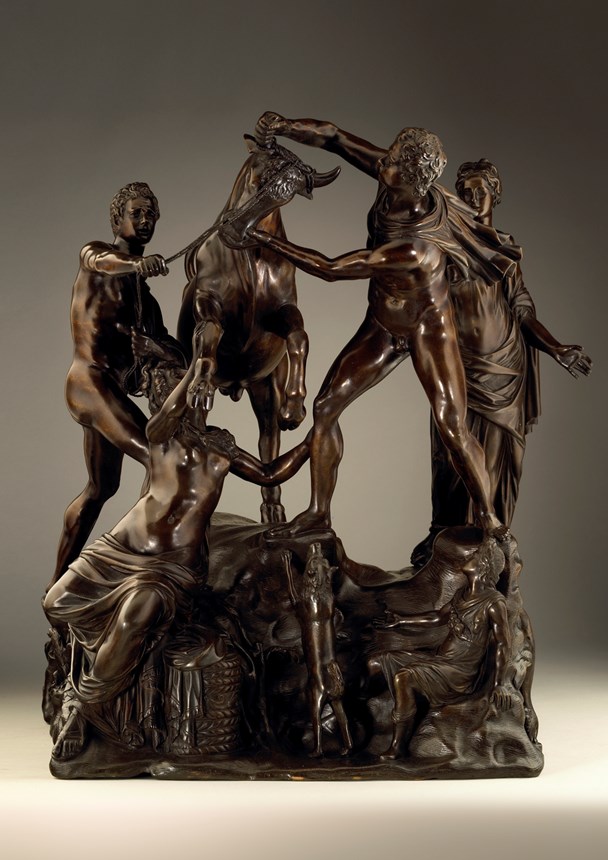 First half of the 17th century

Born in Florence towards the end of the sixteenth century, Giovanni Francesco, or Gianfrancesco, Susini learned the art of bronze casting from his uncle Antonio, one of the most talented disciples of the undisputed master bronzier of the period, the great Giambologna (1529-1608). Indeed, the biographer Filippo Baldinucci (1624-1697) writes in his Notizie on Antonio Susini (ed. Ranalli, 1846, IV, p. 110) that the sculptor was greatly esteemed by Giambologna, who sent him to Rome to make copies of the finest statues in that city. Among these was the monumental marble group referred to as the Farnese Bull, which had been excavated in 1545 in the Baths of Caracalla and had entered the prestigious Farnese collection the following year, to be restored by Gian Battista Bianchi in 1579. Antonio Susini made several bronze statuettes of this ancient marble, though interestingly Baldinucci describes the model at some length as being one of the works of his nephew Gianfrancesco, whom the writer knew personally (ed. Ranalli, 1846, IV, p. 118).

This spectacular bronze group is expertly cast (in several components invisibly joined together) and chased. The nude parts of the human bodies and the hides of the little animals are well polished, while the whole surface of the mound on which the action takes place is treated with a matt punch in neat lines that carefully follow and emphasize its contours, while one or two areas are left smooth, by way of contrast.

The group is a massive, hollow cast that conforms inside to the shape of the mound. To this some figures were attached by shaping the ends of their casting sprues into tangs, which were then hammered through holes in the mound, for example beneath the rear legs of the dog, visible from below; or by tapping on a screw thread, to which a nut may be applied, once it has passed down through a hole bored in the mound –as, for example, in the complete figure of the attendant at the rear right corner.

Beneath the collapsed body of Dirce awaiting her punishment, thick iron-wire armatures project down around some refractory material from the core. Some rectangular insertions of metal (for example, when seen from below, one more or less in the centre and others in lower left and upper right corners) are not fixings for figures above, but patches for holes. These may have been rectangular in the first instance, having been formed in the wax casting model by iron rods passing through by way of armatures to centre and secure the whole heavy casting when invested with its core material and plaster cope.

The lower edges of the mound are pleasingly uneven and vary in thickness. At the rear right corner an extra area of thickness is caused by a repair made with a second run of metal. The model is probably taken from the same set of cleverly designed piece moulds that were made by Antonio Susini when he executed the several casts that he signed and dated 1613. The design here is virtually identical, save for a few insignificant details.

Another variation, perhaps introduced to simplify the laborious process of manually chasing every square centimetre of the surface, is the fact that the rope with which the men are restraining the bull, by winding it round its horns, is here rendered by a continuous length of spiral wire, whereas in the cast signed by Antonio the length bound round and strung between the horns is cast on to the curly crown of hair on the bull’s head. The bony ridge of the beast’s eyebrows and the sharp breaks in the folds of the cloaks slung round the necks of Amphion and Zethus, as well as the dress of the female in attendance, have been smoothed over, again for ease of production. This sort of minor alternation indicates a later date within the span of activity of the firm of the Susini, and points to the activity of Gianfrancesco. Admittedly, the smoother, rounder feel of the piece may also be a reflection of a change of taste in the early Baroque period, away from the stylized, staccato, visual effect of Giambologna’s and – more pronouncedly – Antonio Susini’s idiosyncratic technical handling.

Antonio Susini’s cast in the Galleria Borghese (no. CCXLIX) is inscribed: ANT.II SVSINII FLOR.I OPVS/A.D.MDCXIII (on the base, between the feet of the man with a rope) and it was noted in the Borghese collection as early as 1625 by Crulli (Grandezze di Roma, 1625, p. 50v). Subsequent references in the eighteenth century mention that the bronze was placed on a pedestal of ebony ornamented with hard stones, which has since been lost. This and the virtually identical cast in the Hermitage, St Petersburg (inv. no. 1210), are scrupulously careful reductions of the monumental marble group and the reliefs round its base; the hypercritical and perfectionist German critic Winckelmann (Monumenti antichi, [1767] 1830, V, p. 23) noted on the Borghese statuette only a few discrepancies from the original. Every tiny detail, each fingernail, for instance, is meticulously executed, while extraordinary variety is achieved in the drapery patterns and rendering of texture. The small work is a tour de force technically and offers a vocabulary of Susini’s bronze finishing methods, which were highly praised by his contemporaries.

Examples of Gianfrancesco Susini’s variant versions mentioned by Baldinucci are thought to be those in the Liechtenstein Collection (recorded in an inventory of 1658) and the Grünes Gewölbe, Dresden (bought by Le Plat in Paris in 1715: see Holzhausen and Kersting 1933).

The rather obscure story behind this sculpture is recounted in detail by Lemprière in his famous Classical Dictionary (1788): “Dirce was a woman whom Lycus king of Thebes married after he had divorced Antiope. When Antiope became pregnant by Jupiter, Dirce suspected her husband of infidelity to her bed, and imprisoned Antiope, whom she tormented with the greatest cruelty. Antiope escaped from her confinement, and brought forth Amphion and Zethus on mount Cithæron. When these children were informed of the cruelties to which their mother had been exposed, they besieged Thebes, put Lycus to death, and tied the cruel Dirce to the tail of a wild bull, which dragged her over rocks and precipices, and exposed her to the most poignant pains, till the gods, pitying her fate, changed her into a fountain, in the neighbourhood of Thebes.”