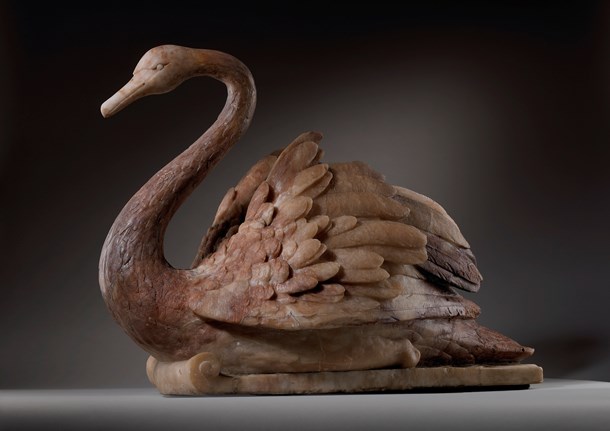 Second quarter of the 17th century

These four swans represent an exceptional survival of secular genre sculpture from the 17th century, a period when an indigenous English school of sculpture was virtually non-existent. A tradition of alabaster carving of international stature had been well established in England since the Middle Ages, thanks to large quarries in Nottinghamshire and Derbyshire, but the upheavals of the Reformation and dynastic conflicts in the mid-16th century effectively eradicated major ecclesiastic and courtly patronage of the arts for several generations, and until the 18th century English sculpture was ‘very largely a question of tombs and monuments’ (Whinney, p.26). During the Jacobean and Carolean periods most English sculpture was therefore produced by stonemasons rather than trained artists, and patrons with higher pretentions for their commissions would normally turn to foreign artists, such as the French expatriate Hubert Le Sueur (c.1580-1658) who became official court sculptor to Charles I.

The one notable exception to this penury of native-born talent was Nicholas Stone, born in Exeter and apprenticed at a young age to Isaac James, a Dutch-born stonemason in Southwark. In 1606 he travelled to Amsterdam to work for the Dutch sculptor Hendrik de Keyser (1567-1621), where he spent seven years, marrying de Keyser’s daughter and probably building the portico of the Westerkerk in Amsterdam. Upon his return to London he established a thriving workshop in Covent Garden providing funerary monuments. He soon became associated with the rising young court architect Inigo Jones, with whom he would collaborate on numerous royal commissions throughout his career, including Banqueting House, Somerset House, the Queen’s House Greenwich and Windsor, where Stone was named ‘master mason and architect’ in 1626, before becoming Master Mason to Charles I in 1632. Stone also participated in many prestigious non-royal architectural projects including York House Water Gate in London and the monumental gates to the Botanical Gardens and the south porch of St Mary’s, both in Oxford. At the same time Stone remained a prolific supplier of funeral sculpture to both London and country parish churches, including Westminster Abbey.

It has been suggested that these swans may have formed part of a tomb monument, possibly atop a canopy or at the four corners of a pedestal. This appears unlikely, however, as the use of heraldic animals on such a large scale and quantity is unprecedented in English funerary sculpture; at most, heraldic beasts appear as part of a crest that figures prominently but not predominantly in the overall composition, and the size of monument required to accommodate these four swans would have been prohibitive in all but the grandest of chapels. If the swans were conceived as a heraldic element, it is more plausible they would have been used in a secular setting, like the 16th-century large polychrome wood Dacre Beasts (Victoria & Albert Museum, London), or the pair of large stone leopards possibly made for Henry VIII’s palace in Dartford (exhibited Treasures of the Royal Courts. Tudors, Stuarts and The Russian Tsars, Victoria & Albert Museum, London 2013, no.56). One earlier parallel to these swans does survive, the large alabaster pelican feeding her young at Lumley Castle, County Durham (ill. Henderson, p.190, fig.218, and below) now mounted on a square fountain pedestal but depicted atop a round marble basin in a watercolour that appears in Folio 29 of the inventory of the celebrated Elizabethan collection of Sir John Lumley (1533-1609), whose coat of arms incorporated the mother pelican.

It is interesting to note that the swans have no signs of former fixation holes suggesting they were attached to an architectural canopy, and therefore it is probable they served a more bucolic function, as part of a fountain, garden or - most likely of all - a grotto. The latter option is further supported by the swan’s provenance from a scion of the Herbert family who resided in the village of their principal seat: Wilton House.

Upon acceding to the title in 1630, Philip Herbert, Fourth Earl of Pembroke set about updating the Tudor house built by his grandfather the First Earl in the 1550s, adding the celebrated South Front in the new Palladian style designed by Inigo Jones and his assistant Issac de Caus (1590-1648), a French Huguenot architect and landscape designer, who worked at Somerset House and was, along with his brother Salomon, responsible for introducing the latest technological innovations in garden hydraulics into England. Isaac published a most significant treatise on the subject of the hydraulic movement of sculptures, Nouvelle invention de level l’eau plus hault que sa source avec quelques machines mouvantes par le moyen de l’eau, et un discours de la conduite d’icelle (London,1644), although a significant part of the book was a reworking of Salomon’s own treatise, Les Raisons des forces mouvantes published in 1615.

During the 1630s de Caus also re-designed the gardens at Wilton, which the diarist John Evelyn would describe as ‘esteem’d the noblest in all England’, with innovative French parterres and a complex system of fountains and waterworks that culminated in a celebrated grotto, one of the first of its kind in Britain, with spouting marine creatures, a table with hidden jets to shower unsuspecting visitors, and hydraulics that simulated ‘the singing and chirping of Birdes’. The gardens attained such notoriety that the writer John Aubrey remarked, ‘Charles I did love Wilton above all places, and came thither every summer.’

It was natural that de Caus turned to Nicholas Stone in this endeavour, as Stone had already worked on the grotto at Banqueting House designed by Inigo Jones and fountains for the gardens at Somerset House, as well as outdoor sculpture for private clients like Sir William Paston at Oxnead, Norfolk. Moreover, it has recently emerged that Stone executed the sculpture for the grotto designed by de Caus for the Earl of Bedford at Woburn Abbey at the same period. Thus as Stone’s nephew Charles Stoakes wrote in Stone’s Note-book and Account Book, his uncle ‘designed & built many curious works for the Earle of Pembrock at his Hons. House att Wilton, near Salisbury & well paide’. The Wilton garden design proved hugely influential and was disseminated through Isaac de Caus’ volume of engravings Hortus Penbrochianus: le Jardin de Vuilton, published by Thomas Rowlett in c.1645. Unfortunately this publication does not provide a comprehensive visual record of the original layout of all the statuary, and the garden itself was significantly altered in the 18th and 19th centuries, particularly during the tenure of the 9th ‘Architect Earl’ Henry Herbert (1693-1749), who designed the Palladian Bridge in the park. In the absence of surviving documentation it is impossible to draw up a definitive inventory of the garden sculpture; nevertheless, the Herbert family provenance of the swans, and the virtuosity of the subject and their execution, strongly militates in favour of their full attribution to Nicholas Stone at Wilton and their forming part of the statuary in the celebrated grotto.

An important comparison to our swans can be seen at Houghton Hall, Norfolk, the palatial country house built for Sir Robert Walpole in 1722. Here there are a pair of seventeenth century English alabaster swans located in the Dining room, that appear to be carved by the same hand. They are modelled from the same beautiful variety of English alabaster, are around the same size and possess a remarkably similar facture and spirit to the present set of four. They were first recorded in the Dining room of Sir Philip Sassoon, Bt, at 25 Park Lane, London, before 1927 and again in July 1939.