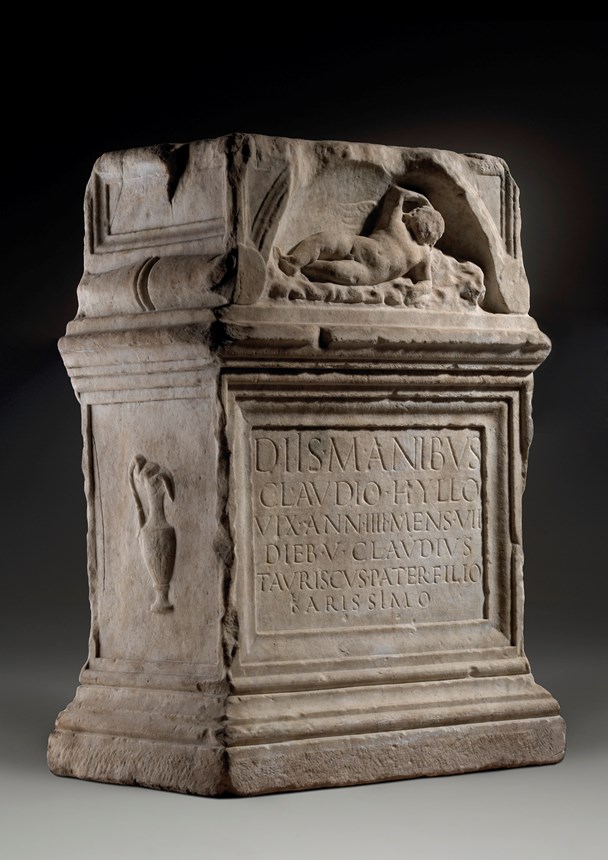 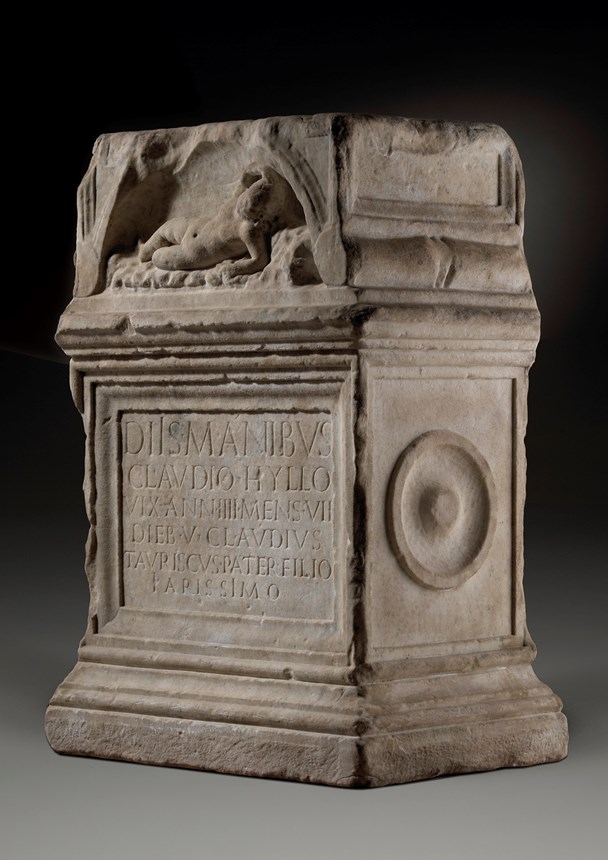 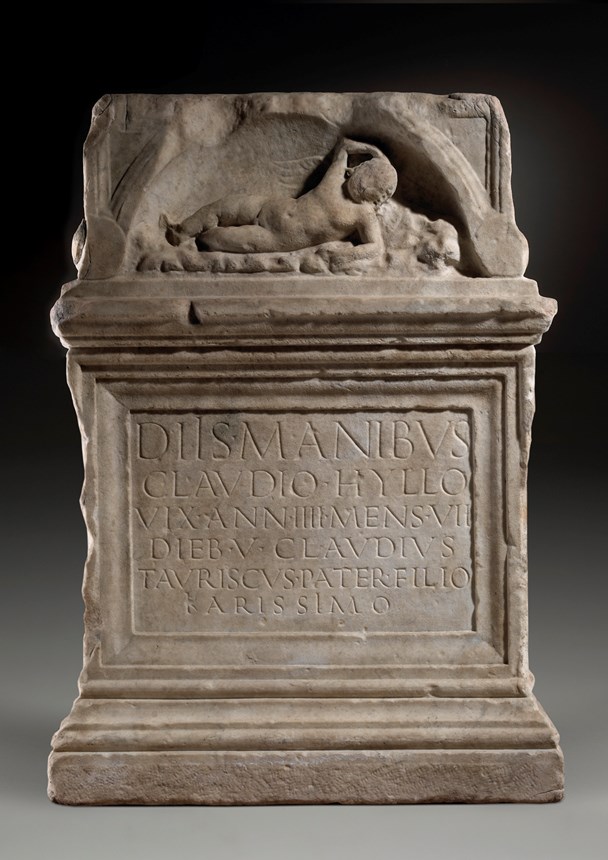 Since the time of the Republic, in ancient Rome the deceased were often honoured and commemorated with funerary altars dedicated to their memory, which could be separate from their resting place (traditionally a cinerary urn), or associated to it. Altars always bore a dedicatory inscription, paired with either a portrait or an image of more symbolic nature. In the present case, the epitaph is dedicated by Claudius Tauriscus to the memory of his young son Claudius Hyllus, whom the father affectionately terms “karissimo”, meaning “most dear”. Above the inscription is carved a winged, Cupid-like figure lying on one side, his right arm positioned above his head. In ancient Rome, this gesture traditionally symbolised sleep, as famously exemplified by the Sleeping Ariadne sculpture in the Vatican Museums. On the short sides of the altar are an ewer and a patera (or libation dish). Being allusions to the practice of pouring liquids as an act of commemoration, these two motifs often recur in Roman funerary altars, such as that of Caetennia Pollitta in the Rijksmuseum van Oudheden, Leiden, or that of Cominia Tyche in the Metropolitan Museum, New York. The chronological distribution of Roman funerary altars centres on the late first and the early second centuries AD, evolving from the monumental altar tombs of the late Republican period (B.C. Ewald, “Funerary Monuments” in The Oxford Handbook of Roman Sculpture, 2015, p. 393). Over the course of the second century AD, numbers declined sharply, and only a few examples were produced in the third and fourth centuries AD (Boschung 1987, p. 53, in Ewald, “Funerary Monuments”, p. 394).

As noted by Vermeule and von Bothmer (op. cit.) the present altar possesses “one of the most distinguished epigraphic pedigrees of any Roman marble". The entry dedicated to it in the 1882 Corpus Inscriptionum Latinarum – to this day the most comprehensive collection of classical Latin inscriptions – lists more than twenty manuscripts, dating from the first half of the fifteenth to the latter part of the eighteenth centuries, in which our altar and its epitaph are described (op. cit.). These are crucial to tracing the object’s provenance, which goes as far back as the 1430s. The earliest mention appears in two manuscripts (ms. 430, Rome, Biblioteca Angelica, fol. 26bis; ms. 1191, Parma, Biblioteca Palatina, fol. 94) that bear transcriptions of Cyriacus of Ancona’s notes on the antiquities he observed during his travels across the Mediterranean. Termed “the founding father of modern classical archaeology”, Ciriaco de’ Pizzicolli was born in Ancona in 1391, and started travelling due to his family’s merchant business (E. W. Bodnar and C. Foss, Cyriac of Ancona: Later Travels, 2004). Spurred by the humanist ethos of his age, Cyriacus began to copy and sketch the hundreds of ancient monuments and inscriptions he encountered in his travels, creating a vast corpus of work. In 1433-35 he was in Rome, in the service of the Holy Roman Emperor Sigismund, as his guide to the city’s antiquities. It is most likely at this juncture in his career that Cyriacus would have had the time and means to copy the inscription on the present altar, which he notes was located in the house of a certain “Girisôtis”, at the “Forum Iudaeorum”, the city’s historic Jewish quarter, on which site was later established the ghetto, by the Portico of Octavia.

In the latter part of the fifteenth century, Claudius Tauriscus’s dedication to his son is recorded in three separate manuscripts. The friar and classical scholar Giovanni Giocondo (c. 1433-1515), who in his youth visited Rome to study and draw the city’s antiquities, saw it in the house of Gentile Baffi (ms. Iucundus Veron. f. 41 and ms. Magliabechi, f. 65), whose name is listed in relation to sixteen other Roman inscriptions in the Corpus, some of which subsequently entered prestigious collections such as the Mattei and Carpi. Gentile Baffi’s residence was in Palazzo Tebaldeschi, also known as the Torre del Melangolo, which stood until circa 1580 on the site of today’s Palazzo Clementi-Patrizi in Via dei Funari (A.D.S.I., Cortili Aperti, Roma Rieti e Viterbo aprono i loro cortili, Rome, 1996, p. 12). Interestingly, this location is exactly adjacent to the Portico of Octavia, the heart of the “Forum Iudaeorum” where Cyriacus had seen the altar some fifty years earlier. The humanist Pomponio Leto (1428-1498), who is attested in Rome from the 1450s, records it in the house of a Pietro Romano (ms. P. Sabinus. Marc., fol. 135). An individual of that name appears in other contemporary documents as the proprietor of a house behind the Church of Santa Maria alla Minerva, not far from Palazzo Tebaldeschi, where foreign diplomats often lodged (C. Fletcher, Diplomacy in Renaissance Rome: The Rise of the Resident Ambassador, Cambridge, 2015), but “Pietro Romano” may also be read as a reference to Pietro Tebaldeschi da Norcia, who was senator of Rome in 1456, 1457, 1464 and 1467. This would certainly make sense owning to Giocondo’s record of Palazzo Tebaldeschi and to the third manuscript source relating to our altar from the second half of the fifteenth century, the Codex Ambrosianus (A, 55), which also speaks of “the house of Tebaldeschi”. The altar is next mentioned by Mariangelo Accursio (c. 1490 – c. 1545), an esteemed man of letters and student of Roman epigraphy, in the vestibule of the “domus Albertini” in the rione Campitelli, the same area where the previous sightings had occurred (Codex Ambrosianus, D, 420, fol. 57). Hülsen (1917, op. cit.) proposes identifying the “domus Albertini” with Palazzo Tebaldeschi. The connection appears persuasive, all the more so if we consider that Accursio’s mother was a Tebaldeschi da Norcia.

In 1535 the young French cartographer Jean Matal saw the altar in the garden of Palazzo Cesi on the Janiculum Hill (Metellus, Codex Vaticanus 6039, fol. 267, in Hülsen, 1917, op. cit.). This palace, the residence of the influential Cesi family near Saint Peter’s Basilica, is where Cardinal Paolo Emilio Cesi (1481-1537) had begun assembling a considerable collection of antiquities in the 1520s, which was inherited and expanded by his brother Federico (1500-1565), also a Cardinal, in 1537. Famous sculptures once owned by Paolo Emilio and Federico include the Pan and Apollo group in the Museo Nazionale Romano, the so-called Cesi Juno and Cesi Rome now in the Musei Capitolini, and the Captive Barbarian King also in the Capitolini.

Two drawings, dated circa 1560, respectively by the Tuscan architect and sculptor Giovanni Antonio Dosio (1533-1611), who resided in Rome from 1548 to 1574 (G. Tedeschi Grisanti and H. Solin, op. cit.; the Dosio sketchbook bears the inscription “nel giardino del R.mo Car.le cesis”, fol. 20 v), and by the French antiquarian Jean-Jacques Boissard, who had himself assembled a collection of antiquities while in Rome [J-J. Boissard, inv. S68; inv. S 68; Codex: inv. S 68; Boissard MS, Cod. Holm., c. 1559, Kungliga Biblioteket, Stockholm, fol. 035 v (reference to Cesi collection on fol. 32 r)] further record the appearance of our altar and its presence in the Cesi Garden. Boissard also published a faithful illustration of our altar in his 1597 Pars Romanae Urbis Topographiae & Antiquitatum, where the marble’s location is again indicated as the gardens of Cardinal Cesi’s palace (op. cit.).

In 1621/1622 Ludovico Ludovisi - the scion of a prominent patrician family from Bologna, who was to become Pope Gregory XV from 1621 to 1623 – acquired about 100 sculptures from the Cesi. A hundred years later, in 1720, a considerable portion of the Cesi antiquities were purchased by Pope Clement XI for the Capitoline Museum, while the rest of the collection was gradually dispersed on the Roman art market. Towards the end of the eighteenth century, the altar of Claudius Hyllus appears to have been for a time in the Roman atelier of the famed sculptor and restorer of antiquities Bartolomeo Cavaceppi (1715-1799) (Hülsen, 1917, p. 13). This is corroborated by the iconographic parallels, noted by Seymour Howard in Antiquity Restored, between the image of the sleeping genie on Claudius Hyllus’ memorial and Cavaceppi’s marble group Boy and a Dolphin, which represents a lifeless, stretched out child being carried by a dolphin (op. cit.).

It is most likely in Cavaceppi’s studio that the distinguished painter turned antiquarian Gavin Hamilton (1723-1798) saw the altar for the first time, and it is certainly through him that the marble entered the collection of Sir William Petty Fitzmaurice (1737-1805), 2nd Earl of Shelburne and later 1st Marquess of Lansdowne, for whom Hamilton acted as agent and advisor in Italy.

Sir William, the son of an Irish peer and politician, was educated Oxford university. In 1760 he joined parliament and three years later, after inheriting his father’s title in 1761, he entered the House of Lords. From March 1782 he served as home secretary under Lord Rockingham and, upon the latter’s death, succeeded him as Prime Minister in July of the same year. An early advocate of the withdrawal of British troops from America, as Prime Minister Sir William oversaw the peace negotiations that led to the birth of the independent United States. Having retired from politics in 1783, he was created the 1st Marquess of Lansdowne. Sir William’s spectacular art collection was hosted in Lansdowne House, his grandiose London residence, which had been designed by the preeminent architect Robert Adam (1728-1792). At the end of the nineteenth century, our altar was seen there by Adolf Michaelis, who described it in his seminal study on ancient sculpture in British collections (op. cit.). Situated in the famous sculpture gallery, it supported a group of Eros and Psyche that had been excavated by Hamilton on the site of Hadrian’s Villa in Tivoli and is now in the San Antonio Museum of Art. As noted by British Museum curator Arthur Hamilton Smith, our marble is possibly to be identified with the ‘small ara’ or ‘Sleeping Cupid’ mentioned by Gavin Hamilton in a letter to his patron dated July 13, 1776 (op. cit.).

The long and rich history of this altar – spanning from the Roman Empire to the zenith of the British as art collectors in the late eighteenth century – is where its unique and intrinsic value arguably resides. Commissioned by a devoted father to commemorate the premature loss of his son, it would have been prized by his family as a tangible homage to the young boy and as a reminder of his existence. In the fifteenth century, it received renewed appreciation for its inscription, the testimony of a culture long gone, whose rediscovery – which had begun through ancient manuscripts –  lay at the heart of Italian humanism, the beginning of the Renaissance. In the following century, when the papal court in Rome reached its greatest magnificence, ancient art and its rediscovery gradually took centre stage, as had been the case for the writings of Ovid, Cicero, Seneca and others in the Quattrocento, and artists and patrons alike sought to both emulate and surpass the splendour of the ancients. Within this context, the altar acquired again new significance, and the focus shifted from its inscription to its structure and decoration. The effects of this shift reverberated into the eighteenth century, when Cavaceppi carved his Boy and a Dolphin and a new generation of British patrons and connoisseurs looked at ancient Rome for direction. In other words, by virtue of its provenance the present altar bears witness to some of the most significant episodes in the history of Western art and collecting.