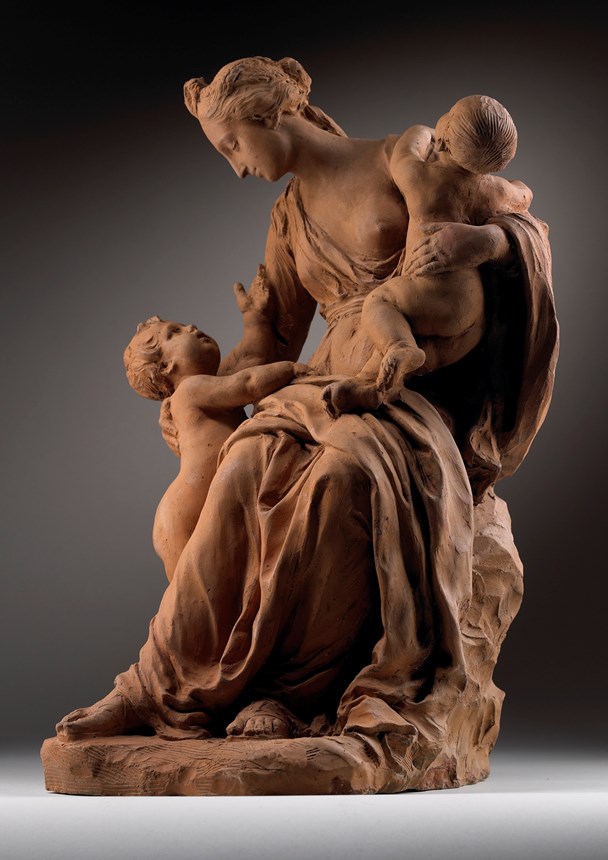 First quarter of the 18th century

The present terracotta group of Charity constitutes a fascinating addition to the corpus of Flemish sculptor Michiel Van der Voort the Elder, the author of important contributions to the development of the Flemish Baroque. These include the pulpits now in the Cathedral of Our Lady in Antwerp, formerly in Saint Bernard’s abbey in Hemiksem (1713), and in the Cathedral of Saint Romuald (or Rombold or Rombout) in Mechelen, originally from the church of Onze Lieve Vrouw van Leliëndaal (1723); church furnishings including wooden confessionals; and funerary monuments, such as those for Count Prosper Ambrosius de Precipiano (1709) and for Archbishop Hubertus Guilelmus de Precipiano, both in the Cathedral of Mechelen.

In stylistic terms, Van der Voort’s images of saints and allegorical figures all display closely comparable characteristics, which, as illustrated below, confirm our Charity’s attribution to the master. A native of Antwerp, Van der Voort was registered with the local guild of Saint Luke in 1690, and set off for Rome shortly after that date. His sojourn in the Eternal City significantly influenced his artistic vocabulary, which visibly tempers the tendencies of the late Flemish Baroque style with the lesson of classical antiquity, as attested in the present terracotta.

The theme of Charity, understood in its religious sense as a theological virtue, recurs within Van der Voort’s oeuvre. The Musées royaux des Beaux-Arts de Belgique in Brussels hold a beautiful marble group of the same subject (fig. 1), and another version of it, this time in stone and with the main character standing up, is today in a private collection. In both cases, the female figure is accompanied by three children and not two as in the present work.

Close resemblances in terms of facial features and posture exist between the standing child in the Musées royaux group and that in our terracotta. Both lift their arms in the air seeking the female figure’s embrace, a motif that reappears in a drawing by Van der Voort now in the Museum Plantin-Moretus in Antwerp (fig. 2). The similarities are equally striking between the infant being held in the woman’s arms in our terracotta and the one sleeping in the marble group. The same type of figure, with a willowy yet plump anatomy, oval face, high forehead and smooth hair, is repeated by Van der Voort, for example, in the two genii in the funerary monument to Count Prosper Ambrosius de Precipiano (fig. 3), and in one of the putti that sits at the foot of the statue of Saint John for the choir door in St James’ Church in Antwerp (1723; fig. 4).

The overall appearance of the central figure in Charity, with her tranquil countenance and delicate gestures, also finds parallels in other works by the sculptor. Her face is sensitively modelled, with a small mouth and almond-shaped, partially closed eyes, and her hair is arranged in soft wavy strands. The same traits characterize Van der Voort’s figure of Hopein the wooden confessional of Antwerp Cathedral (1713; fig. 5) and of The Virginin the monument to Archbishop Hubertus Guilelmus de Precipiano. A comparably sophisticated hair arrangement can be found, moreover, in the terracotta allegory of Constanceby Van der Voort now in the Musées royaux des Beaux-Arts de Belgique, which also presents a treatment of the drapery very similar to the present one (54.5 cm high; fig. 7).

These comparisons clearly illustrate Michiel Van der Voort the Elder’s authorship of the present composition, which is further confirmed, in the specific case of his terracottas, when one observes their consistent level of finish, with elements such as the drapery rapidly sketched, and Van der Voort’s characteristically delicate yet brisk quality of modelling.