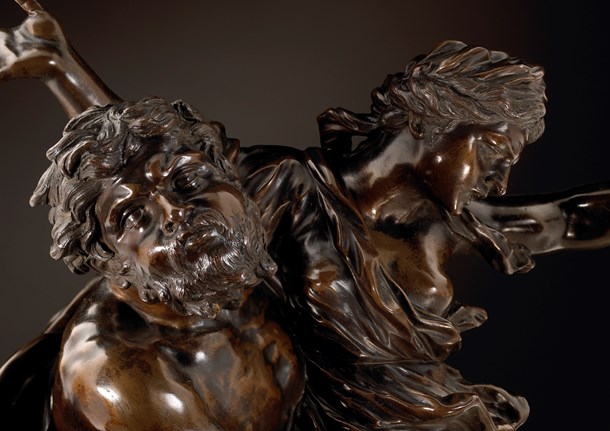 First quarter of the 18th century

Described by his contemporary, the biographer Francesco Saverio Baldinucci, as a precocious talent, Giovanni Battista Foggini began his apprenticeship at the age of ten, in his native Florence, in the workshop of the painter Iacopo Giorgi. By the age of fifteen, thanks to the introduction of mathematician Vincenzo Viviani, Giovanni Battista was employed by Grand Duke Ferdinando II de’ Medici, for whom he executed “heads and bas-reliefs in marble”, with a salary of four scudi a month (Baldinucci [c. 1725-30] 1975, p. 373). In 1673 he was sent by the new young Grand Duke of Florence, Cosimo III, to study in the recently instituted Florentine Academy in Rome. He remained there for three years, studying under Ercole Ferrata, a sculptor of the second Baroque generation, and Ciro Ferri, a painter who was a close follower of Pietro da Cortona. His precocious ability at this period is demonstrated by a terracotta relief of the Slaying of the Niobids (Museo dell’Opificio delle Pitre Dure, Florence), a marble relief of the Adoration of the Shepherds, now in the Hermitage, Saint Petersburg (Montagu 1973) and a bronze relief of the Crucifixion, until recently ascribed to the court sculptor of the day, Ferdinando Tacca (Museo degli Argenti, Florence).

Upon his return from Rome in 1676, Foggini immediately began to receive commissions for sculpture in the novel, Late-Baroque style he had evolved.  He was appointed grand-ducal sculptor in 1687, succeeding Ferdinando Tacca, and in 1694 became the official architect as well; from then until his death in 1725, he was chiefly employed on commissions for the Medici. His main earlier projects, involving both sculpture and architecture, were the reliefs in the Corsini Chapel in the church of the Carmine (finished 1691) and the Ferroni chapel in Santissima Annunziata. His biographer, Baldinucci, mentions “gruppi e statuette e bassirilievi di Bronzo di rara perfezione” (“groups and statuettes and reliefs in bronze of rare perfection”) between his descriptions of these two major projects, implying that the majority of Foggini’s smaller, private commissions date from the 1680s or 1690s.

The earliest record of a Boreas & Orithyia group by Foggini dates to 1703, when the Corsini family acquired a bronze of this subject, together with its pendant Pluto and Proserpina, both now in the Galleria Nazionale d’Arte Antica in Palazzo Corsini, Rome. These must have been modelled by the master prior to 1702, for each composition is immortalised in frescoes of that date on the end walls of the ballroom in the Palazzo Incontri in Via de’ Pucci, Florence (Ginori-Lisci 1972, pp. 428-29, fig. 346). A second pair of casts of Boreas & Orithyia and Pluto and Proserpina by Foggini is today in the Art Gallery of Ontario in Toronto.

Orithyia was the daughter of Erectheus, King of Athens. One day, while bathing in the river Illissos, she was observed by Boreas, the God of the North Wind, who fell in love with her on sight and abducted her. Similarly, upon seeing Proserpina, the daughter of the goddess Ceres, Pluto abducted her to his underworld kingdom. The composition of Boreas & Orithyia is carefully calculated to form a balanced pair with its pendant: each male god is shown in the act of running, his weight balanced on one leg and, in both the Corsini and AGO casts, set on a narrow base symbolizing the element with which each is associated. In the case of Boreas, God of the North Wind, this is a cloud; in that of Pluto, King of the Underworld, it is a flame. Their female victims are shown kicking their legs in an attempt to free themselves and with their arms outstretched, as though crying for help. The rippling pattern of drapery folds, characteristic of Foggini, is contrasted with the smoothly modelled and highly polished areas of naked flesh. This pair of compositions was first discussed in detail by Hugh Honour in 1965, who examined the AGO casts, then in the collection of Mr and Mrs George Farrow in England. He noted how these embodied the “high technical quality one has come to associate with this school” and “are magnificent examples of the suave late baroque style of Florence” (p. 84). In the present Boreas and Orithyia, the highly finished, carefully chased and painterly quality of the surface, the soft yet muscular treatment of the anatomies, and the accurate, needle-like, punching of details such as the hair, all speak of Foggini’s mastery in modelling and casting bronzes. The deeply modelled definition of Boreas’ brows and eyes, and the arch of his curled lips, closely correspond to those of the Corsini and AGO versions, as do details such as the lines in Orithyia’s open palms, and the toes and nails of both figures.

The earliest documentary mention of the Boreas and Orithya and Pluto and Proserpina groups by Foggini is in the catalogue of an art exhibition held in the cloisters of the Florentine church of Santissima Annunziata on the Feast of St. Luke (patron of painters, after whom the Florentine Accademia was named) in the year 1729 (Florence, 1729). In the Nota de’ Quadri che sono esposti per la festa di S. Luca, it appears that Foggini’s son Vincenzo and his brothers were responsible for lending a composition described as a “gruppo di Bronzo col Ratto di Proserpina di Gio. Battista Foggini” [and another] “esprimente Bore ache rapisce Orizia di Gio. Battista Foggini” (Salvadori 1974, p. 85). They had presumably inherited the bronzes, along with others which they also exhibited, from their recently deceased father, and may have hoped to sell them thereby. Similar – if not the same – bronzes by Foggini were again exhibited at Santissima Annunziata a generation later, in 1767, as the property of Giuseppe Borri: the Rape of Proserpine is mentioned twice, once probably in error for the Rape of Orithyia (Salvadori 1974, p. 85; Detroit/Florence 1974, no.25; Zikos, 2014).

Piece moulds for these two groups were among those subsequently sold to the Marchese Ginori for use in his Doccia manufactory of porcelain (Lankheit 1962 p. 82). A porcelain cast of the Boreas and Orithyia with a rocky terrasse, not a cloud, is in Chicago, while an example of the Pluto and Proserpina in porcelain is in the collection of Lord Methuen, Corsham Court, Wiltshire, and a broken wax model is in the Museum at Doccia (Lankheit 1982, fig. 139). These may have resulted from Vincenzo Foggini being paid for making a red wax model of the Boreas and Orithyia in 1744/45 and of the Pluto and Proserpina in 1748/49 (Lankheit 1982, pp. 122-23), and it may have been he who added some drapery round Pluto’s loins for the sake of modesty.

Drapery is crucial to both compositions, and it is interesting to note that one significant difference between the existing casts is that the Corsini Boreas has wings, as does its frescoed counterpart in Palazzo Incontri, whilst the AGO one - like the present bronze - does not, with the result that the drapery can circle more theatrically around the figure and better mirror that in the Pluto pendant. This refinement suggests that the AGO and present versions represent a reworking by Foggini of his initial, less exactly balanced, conception of the two groups. In addition, in the present cast, the advanced left foot on which Boreas balances is screwed to a terrasse, which replaces the cumulus cloud on which both other examples of the composition rest. This likely represented another adjustment aimed at improving the overall composition, specifically in terms of stability. As noted by Dimitrios Zikos, the terrasse’s sloping, finely chased surface, punctuated with tufts of vegetation, closely compares with that in Foggini’s Time Ravishing Beauty in the LACMA collection, dated c. 1700-1725. Other examples of a similar treatment include the bases in Foggini’s Flaying of Marsyas and Hercules and Iole in the Victoria & Albert Museum, and Laocöon in the J.Paul Getty Museum.

As Hugh Honour pointed out (1965, p. 85), Foggini’s inspiration for these compositions, and in particular that of Pluto and Proserpine, is drawn from a painting of the Rape of the Sabines by Pietro da Cortona dating from 1625-30 and now in the Pinacoteca Capitolina, Rome. Nevertheless, his denial in the same article of the influence of Gianlorenzo Bernini’s youthful treatment of the subject of Pluto and Proserpina of about 1621-22 seems ill-judged. For any sculptor, this must have been the primary source of inspiration. Foggini borrows from it directly in his Boreas, whose muscular right arm and heavily bearded face, strained with effort, are closely similar to those of Bernini’s Pluto. Characteristically, Foggini also opens out the composition of his groups to the front by the twist of the females’ bodies and the direction of their wide-flung arms. Foggini’s initial idea for a pair of such groups of mythological scenes of abduction can be glimpsed on a sheet of sketches in which the inspiration followed on from a study for a bronze group of Hercules and Anteus. The latter in turn reflected his knowledge of Giambologna’s two-figure bronze group of the Rape of a Sabine (Naples; New York; Vienna: see Giambologna 1978, pp.105-7, nos. 56-57). All are on large oval plinths. By the time he made his models for the present bronzes he had the daring idea of balancing the male figure on only one leg. This was facilitated by the small scale and the mediums of wax and iron wire for modelling and bronze, with its greater tensile strength than marble, for the execution: it gives to his compositions an irregular, open silhouette. The young Bernini, still distantly under the influence of Giovanni Bologna through the intermediary of his father Pietro, had concentrated on a virtually closed composition. The contrast between the two treatments, separated by perhaps sixty or seventy years, is instructive of the attitude to their source material of the sculptors of the Late Baroque period.