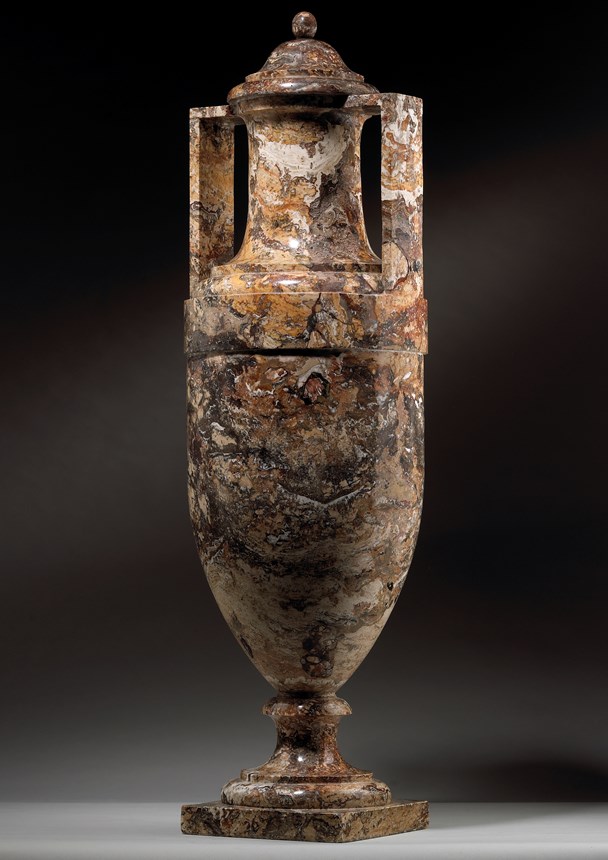 Alabastro di Civitavecchia is a coloured stone derived from a particular type of travertine that originated as limestone deposit from sulphur waters. Its name indicates the geographic location of the quarry, near the town of Civitavecchia in the Latium region of Central Italy, near Rome. It was first described by the 18th century author Pier Maria Cermelli, in his 1782 work on geology and natural history, titled Carte corografiche e memorie riguardanti le pietre, le miniere, e i fossili […], as “Alabaster with highly varied patterns and colours”. His contemporary Giuseppe Morozzo della Rocca also praised the beauty of Alabastro di Civitavecchia in his geological study of the region north of Rome, and records the quarry was discovered around 1780.

It appears that this specific type of alabaster was found across a very limited area outside Civitavecchia, which explains why its quarrying is recorded to have ceased only a decade after its discovery, making it a very precious type of coloured stone. Pope Pius VI (1775-1799), who had a particular interest in pietre dure, commissioned four columns in Alabastro di Civitavecchia for the Galleria dei Candelabri in the Museo Pio Clementino in the Vatican, and other such specimens can be found in important churches across the Eternal City.

The present vase, carved in Alabastro di Civitavecchia, adorned the staircase of a palazzo designed by the architect Giuseppe Piermarini in Milan. An assistant of Luigi Vanvitelli in Rome, Piermarini rose to become one of the most renowned architects of his age, his crowning achievement arguably being the Scala Theatre in Milan, completed in 1778. There, Piermarini – who was named Architect to the Hapsburg Archducal Court governing the city and Professor of Architecture at the Art Academy of Brera, founded in 1776 – redesigned the Royal Palace next to the Duomo, and the residences of some of the most prominent members of the local aristocracy, including the Palazzo Greppi (1772–78), the Palazzo Moriggia (1775), and the Palazzo Belgioioso (1772–81) in Milan, and the Villa Borromeo in nearby Cassano d’Adda (1781).

Piermarini’s classicising, harmonious and yet elegantly ornate designs are rooted in the lesson of his master Vanvitelli, and in the language of classical architecture he would have absorbed in Rome. These characteristics are reflected in the style of the present vase and cover, with its elongated body and crisply cut side handles, which, with their studied simplicity, allow the rich patterns and variations of tonality of Alabastro di Civitavecchia to take centre stage.