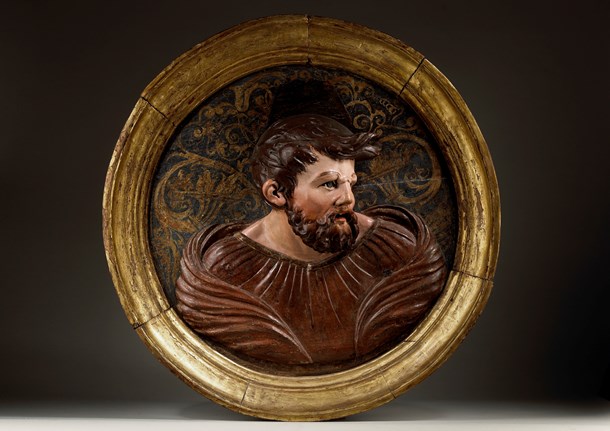 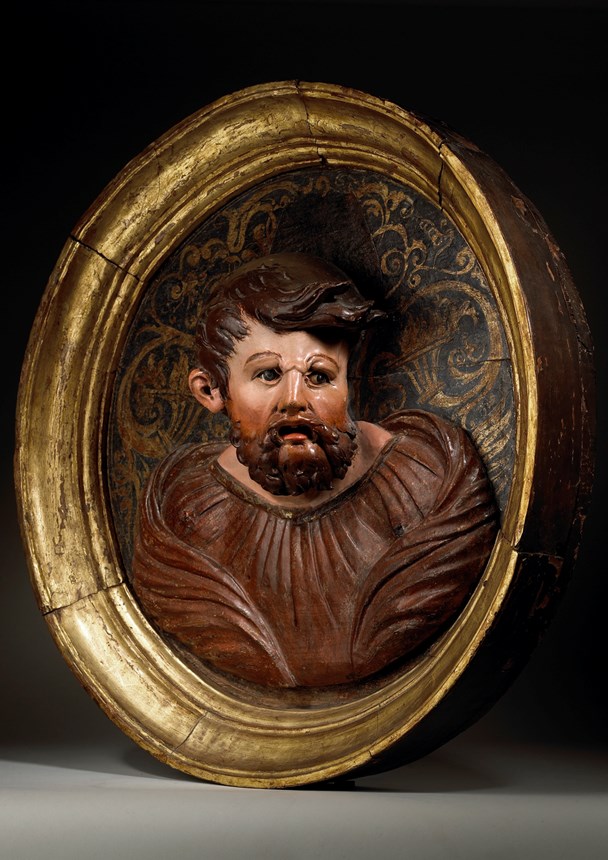 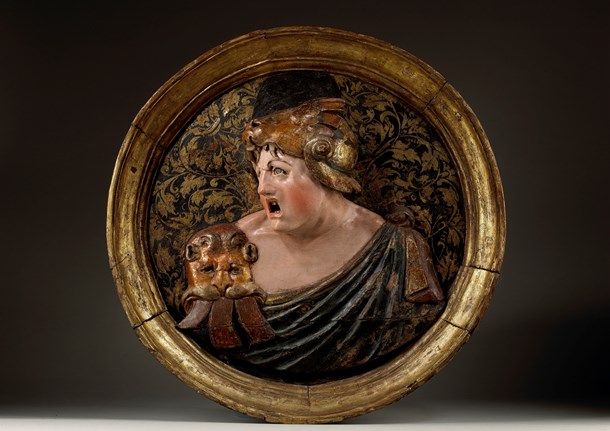 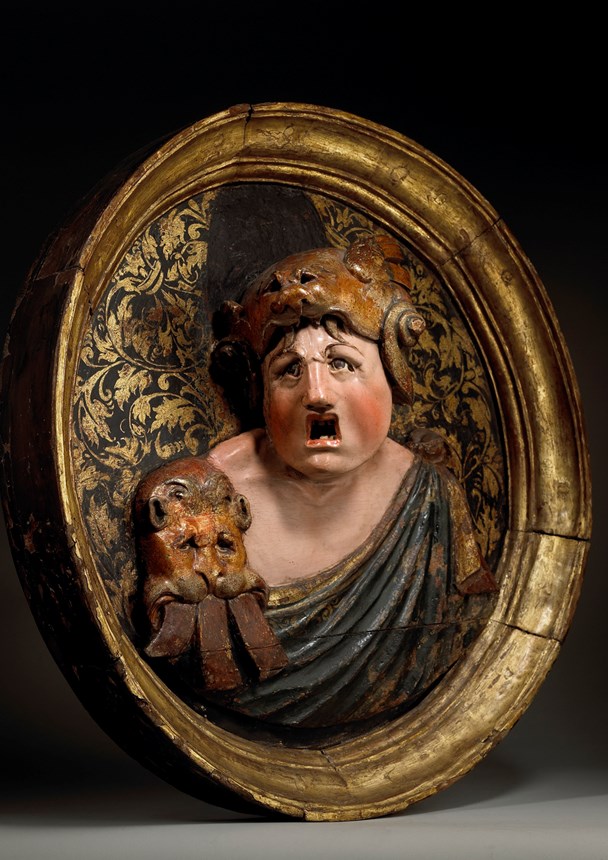 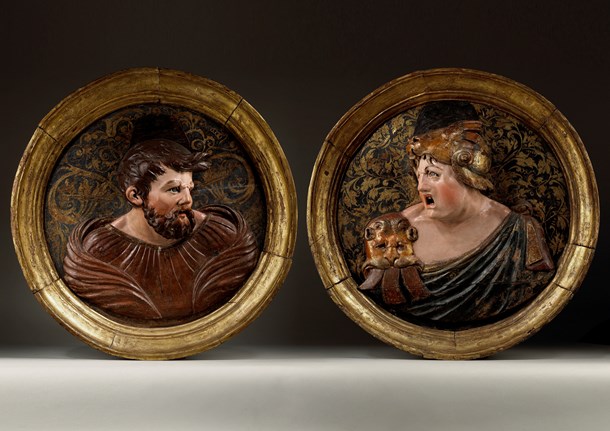 Second quarter of the 16th century

One tondo represents the bust of a man, his head turned towards his left, with abundant hair and a full beard. He wears a tunic, with a cape or toga covering his shoulders. The pendant tondo presents a soldier, head turned towards his right, wearing a tunic fastened on the left shoulder with a brooch. On the other bare shoulder is a lion’s head with three wide straps emerging from the mouth. This figure wears a visor, or helmet, also in the shape of a lion’s head. Both busts are executed in high relief, framed within a tondo, against a dark background decorated with leafy gold vegetation.

These paired reliefs were clearly intended to face each other and their considerable size suggests that they originally formed decorative elements in a large-scale, architectural altarpiece. Given their three-dimensionality and slightly downward-tuned projection, it seems likely that they would have been incorporated into the attic of the structure. Depictions of Roman martyrs were common in the iconographical programmes of altarpieces; in this case the figure wearing the toga must be a patrician and the other a legionary, possibly Saints Marinus and Asterius, both martyred in Caesarea, Palestine, under the Emperor Gallienus. According to the Historia of Eusebius (A.D. 263-339), Marinus was a soldier descended from a noble family; when nominated to be a centurion, he was denounced as a Christian and executed. Asterius was a senator who, after witnessing Marinus’ martyrdom, shrouded his body in order to give him a Christian burial, a deed which cost him his life.

The technique, prototypes, and style place these works within the oeuvre of Alonso Berruguete. Shortly after his return to Spain around 1517, following an extended period of training in Italy, Berruguete emerged as the most original sculptor of the Spanish Renaissance. His artistic career began in the workshop of his father, the painter Pedro Berruguete, through whom he gained a deep understanding of drawing and pictorial technique. These skills, together with his quick and masterful handling of the gouge, made polychrome wood sculpture a perfect expressive medium. Motifs taken from the classical world consistently feature in his designs throughout his career.

Berruguete frequently included busts of this kind in the structure of altarpieces. Such decorative elements are based on Italian models, inspired by antiquities (Roman mosaics, sarcophagi, medals, reliefs, busts of emperors, etc.). However, Berruguete’s interpretation of Roman figures is original, portraying the bust frontally, but turning the head in profile, thereby breaking up a purely linear axis. This device was probably inspired by the Plateresque façade of Salamanca University, where Catholic monarchs and other eminent personages are represented in tondi, while portraits of Roman emperors and generals emerge from scallop shells (for the identification of figures on the façade, see Sebastián 1978, p. 211).

Decorative busts regularly feature in works by Berruguete. Among the most closely related are the Prophets in the upper register of the altarpiece of the San Benito el Real convent, Valladolid, two Male Busts set in the top of the central portion of the altarpiece in the chapel of the College of Santiago el Mayor (or Archbishop Fonseca) at Salamanca University (these relate to figures appearing in the design for a façade in Filarete’s Trattato di Architettura [1460-1464], as does the rest of the design for the altarpiece, see Martínez 2011, p.123), and the medallions with Busts in laurel leaves on either side of the uppermost tier of the Epiphany Altarpiece in the chapel of the de la Haya family in the parish church of Santiago Apostol, Valladolid.

The physiognomies of the characters in these tondi are characteristic of Berruguete’s work. The fine nose, prominent cheekbones, slanted eyes, strongly accentuated frown between the brows, and open mouth are all observable in works like the Saint John in the Calvary scene of the main altarpiece in the monastery of Nuestra Señora de la Mejorada de Olmedo. The carving of the Roman Senator’s hair, with abundant locks and the slightly separated forelock, recalls that in the figure of Isaac in the relief of the Sacrifice of Isaac or the Conversion of Zalla the Goth, both in the San Benito altarpiece. Also characteristic of Berruguete’s style is the engaging glance exchanged between the Roman Soldier and Senator which functions as a decorative device, directing the viewer’s gaze. Other characteristics typical of Alonso Berruguete’s style are the stiff clothing, the polychromy, the rendering of flesh, and the background with vegetal decoration.