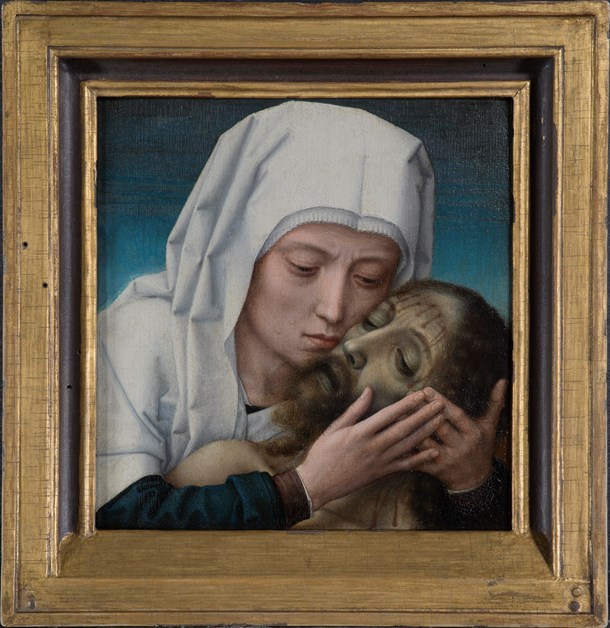 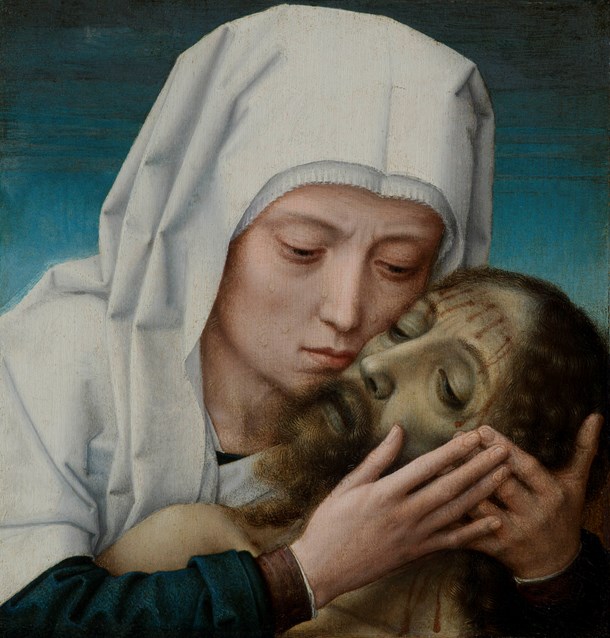 This beautiful, very intimate small gem with the Virgin Mary holding the head of her dead Son close to her tearful face, is one of the many versions of this composition that Max J. Friedländer and Hans van Miegroet linked to Gerard David and his studio. Both art historians regarded a version from the collection of Hans Wetzlar in Amsterdam as the original, all others by David’s studio or later imitators. That view needs some revision, though. First and foremost, the present picture that only surfaced quite recently from a private collection in France was not taken into account by Friedländer and Van Miegroet. However, the painting must have been known to Max Friedländer, since a photograph of the picture in a gold frame in the Friedländer archive at the Netherlands Institute for Art History (RKD) in The Hague carries an original text on the back that states: “v. Tsch. empf. / 95 / Spanien”. Apparently Friedländer received the photograph from Hugo von Tschudi, his colleague at the Berlin Royal Picture Gallery. There can be little doubt that the painting in this photograph is identical to our painting. Unfortunately, nothing is known about its exact whereabouts in 1895, nor do we know exactly what happened to the painting until it was auctioned in Paris in June 1952, as School of Quinten Massys. After that sale the picture remained in France until it recently resurfaced. The frame that is displayed on the nineteenth-century photograph shows the number 50, a possible indication that the painting was once part of a museum- or important private collection.

When comparing our version to the many others we know now, only the version that used to be with the art dealer Thomas Peter Grange in 1957 in London is of a comparable quality and possibly that version may have been painted by Gerard David himself, or possibly Adriaen Isenbrant. All others, including the 1977 auctioned picture from the Wetzlar collection, were the product of David’s studio or of later, less talented imitators. No doubt Gerard David painted our picture after 1515, when he became a free master-painter in the Antwerp guild of Saint Luke. After Bruges lost its position as the foremost trading center and port to Antwerp at the beginning of the sixteenth century, most Bruges painters decided to shift their focus to the rising city on the Scheldt and David was no exception. No doubt David and his workshop decided to focus on the production of small devotional pictures for the open market and he must have been very successful, as can be judged from several compositions that were produced in series, such as the Holy Family or the Virgin and Child with the milk soup. However, as can be judged from the enormous amount of copies, the small Lamentation turned out to be David’s most successful invention. A careful comparison with the other – possible autograph - version that was in London in 1957 is difficult, as long as the two cannot be compared in the flesh, but my first impression is that the Grange picture may have been painted in tempera, just like the Virgin amongst Virgins, a single leaf from a book of hours, tempera on vellum, in the Morgan Library and not in oil, as our picture.

The success of David’s composition – and to a lesser degree a mirrored variation of it  – is based on the intimacy and the directness of the subject, caused by the tearful grief of a mother, the tender way in which she supports her dead Son’s head and the way the composition has been cropped, bringing the Virgin Mary and the dead Christ extremely close to the picture plane and to the onlooker. It is more than likely that David’s London Lamentation provided the model, although, as Lorne Campbell pointed out correctly, the basic idea must have come from Rogier van der Weyden. Gerard David’s intimate “Andachtsbild” would have an enormous impact on his fellow painters in Antwerp, especially on Quentin Massys, in whose workshop the subject became a serial product as well, and well into the 1540s, as is clear from the various versions that were produced by the anonymous Master of the prodigal son. As stated before, these paintings were produced for the open market and many of them found their way to Spain, where the subject was incredibly popular. No doubt, some of the copies that have been listed here, may have been produced by Spanish painters.

However, Gerard David’s utterly refined pearl still stands with one leg in the fifteenth century tradition of the Flemish Primitives, as is clear when we take a closer look at the surface. The enormous subtlety of the brush strokes, the play of light and shadow, the feeling for texture, all indicate one master painter. Especially masterfully painted are Mary’s tears, just single thin glazes followed by miniscule drips of lead white as the highlights that bring the tears to life. Just as brilliant is the slight muscle contraction between the Virgin’s eyes that determines her facial expression. Gerard David had a serious interest in naturalistic facial expressions, as can be judged from the many detailed silverpoint drawings he made of male- and especially female faces after life. These are the elements that differentiate between master and assistant, between a genuine original and a workshop copy. Other details, such as the beautifully painted hands, the proper left one painted in subtle foreshortening, only confirm the attribution to Gerard David himself. Christ’s facial type does differ from David’s usual display, as can be judged from the London Lamentation or the small picture in Saint Petersburg. However, David may have regarded this type too “sweet” for the Antwerp market, that was accustomed to the more morbid representations by Quentin Massys and other contemporaries, such as Albrecht Bouts.

As stated before, our small Lamentation should be dated after 1515, when David entered the Antwerp Guild of Saint Luke. Stylistically it is very close to the London Lamentation and to the beautiful Washington Rest on the Flight into Egypt as well. The light that seems to glow from the faces of the Virgin and Child in the latter painting are absent in our Lamentation, but that is no doubt due to its darker subject matter. What all these paintings have in common, though, is David’s soft handling of the brush and subtle use of highlights in the flesh colors, clearly different from the more linear modeling in his earlier pictures. It is certainly possible that in this regard David looked at the technique of his Antwerp colleagues Quentin Massys and Joos van Cleve.